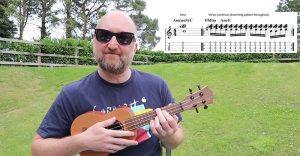 Pearl Jam’s “Can’t Keep” features the acoustic guitar quite heavily. No wonder Eddie Vedder chose it as one of the songs to include on his Ukulele Songs release. Although the song gradually picks up dynamically, the strummed acoustic guitar plays a key role in keeping the song together throughout.

As it turns out, “Can’t Keep” sounds quite good on the ukulele. The chords are a little nuanced. It’s best to refer to the video or tab for a more thorough explanation, but the main riff basically revolves around holding the same chord shape while adding and removing specific fingers.

“Sleeping By Myself” by Eddie Vedder

In “Sleeping By Myself,” the narrator tells the story of heartbreak and feels like they are doomed to remain sad and lonely for eternity. Plenty of people can relate to those sentiments.

There are quite a few chords in this song, but the strumming isn’t too complicated. It’s one of those songs that’s best served with simplicity.

“More Than You Know” by Eddie Vedder

“More Than You Know” seems to evoke images of simpler times. The lyrics are basically about being in love and not being able to get that special someone off you mind.

It might be a bit much for a beginner, but an intermediate player should be able to pick it up no problem. A real romantic ukulele song, even if it is one way.

“Without You” by Eddie Vedder

“Without You” is probably my favorite tune on Ukulele Songs because of the chromatic movement in the chords as well as the melody.

The song tells the story of a relationship that’s collected some bumps and bruises. Regardless of what has happened, the narrator says he can’t see himself without his love.

There’s no guesswork in uncovering what this song is about. It’s a simple song about being brokenhearted.

“Broken Heart” song features a bit of strumming towards the end, but other than that, it’s mostly made up of picking. So, if you want to be able to play along with the original, you’d better work on those fingerpicking skills!

There are also two ukes on this track, so if you can’t get your playing to sound exactly how you hear it on the track, that’s probably why.

Speaking of chromatic progressions and melodies, “Goodbye” has got its share of fascinating arrangement choices as well.

This song is about having to say “goodbye” to someone after having spent half your life with them, which obviously can’t be easy. But it seems to me that this entire album was therapy for Mr. Vedder.

The gentle strains of “Longing To Belong” are accompanied by a cello, drawing out the mixed emotions of the song.

In the dissonance you can sense the challenge, the pain, and the uncertainty.

So we’re past half way. Let’s look at a few more Eddie Vedder ukulele songs.

The intro and verse to “You’re True” is kind of reminiscent of The Who’s “Pinball Wizard.” The rest of the song, though, follows Vedder’s typical chording and melodic sensibilities.

The song tells the story of a man coming into his own. Of course, despite being upbeat, there is still a hint of sadness to the song.

There is some fancy strumming work as well as fingerpicking towards the end of the song. If you’re intermediate and above, you should see if you can pick this up.

This is probably one of the simplest Vedder songs. Even beginners have a chance with it. It basically follows the same chord progressions throughout.

We’ve included the chords above, but these are basically just guidelines. What Vedder is really playing is closer to double stops with a constant open C string. You can find the tab in the link below.

“Sleepless Nights” is a duet with Irish songwriter Glen Hansard of The Frames.

Some of Vedder songs are like guitar songs transported to ukulele, but of all his tunes, this one has the strongest “island” vibe of them all.

The tab (or lead sheet) shows chords in a sharp key. You can adjust to this relatively easily by down tuning your instrument or by using a capo.

Of course, there are always different ways of playing this song.

“Once In A While” by Eddie Vedder

“Once In A While” has got a slight but charming Waltz vibe to it. In most other regards though, it’s just classic Eddie. It also represents a great opportunity to work on your strumming!

That Adim chord can be tricky. I find the easiest way to play it is to make a G chord shape on the second, third, and fourth strings, while adding your pinky to the first string. You can also barre the chord, but I don’t find that as practical.

Formally known as “Dream A Little Dream of Me,” this song was first recorded in 1931 by Ozzie Nelson as well as by Wayne King. The height of its popularity is probably The Mamas & The Papas version from 1968.

The snog is basically a jazz standard. So, if you’ve ever asked yourself what it would be like to hear Vedder perform a jazz tune, all you’ve got to do is put this song on.

Okay, so technically this isn’t a ukulele song. But it is considered the best Pearl Jam song of all time by fans. So, I think you’ll agree – it would be a fun one to try!

“Black” does pick up some steam along the way, at least dynamically, but for the most part, it’s a moderately paced song. That leaves a lot of room for creative interpretations on the ol’ uke!

As well, the chording in this song is a lot easier than some of Vedder’s solo work.

So, do Eddie Vedder and the ukulele belong together? Well, let me put it this way – it works a lot better than you might otherwise think! His baritone voice goes nicely with the higher pitched ukulele. And most fans seem to agree.

I can see what he was trying to do. He wanted to do a more stripped-down, barebones album, wearing his emotions on his sleeve, and singing his heart out. This is usually where artists opt for acoustic guitars.

Still, we’d be lying if we said it didn’t work, and it’s nice to hear Vedder’s trademark progressions on a lone ukulele.