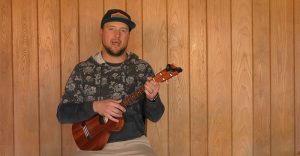 What is the prettiest ukulele song in the world?

How does it sound?

What makes it so special?

And most importantly, how do you play it?

This is a subject mired in mystery. But in this guide, we’ll cover it all! Keep reading to discover the prettiest ukulele song in the world.

What Is The Prettiest Ukulele Song In The World?

Here is a video demonstrating the song (and this is what we’ll be looking at in this guide):

In this video, creator AllForUke simply describes the chord progression as “the prettiest ukulele song in the world.”

Whether it is in fact the prettiest ukulele song, or if it even has the prettiest chord progression, is certainly up for debate. That said, we do think it has merit (more on this later).

Interested in learning how to play this song? Keep reading!

The Chords To The Prettiest Ukulele Song In The World

Here we’ll be looking at the chords that make up this little song. Most of these chords are relatively standard and not difficult. That said, there are some of variations on standard chords, which are always nice to learn.

Just a standard major chord. It only requires two fingers to play. You probably know how to play it already unless you’re a complete beginner.

A beautiful, jazzy variation on a standard A, with the seventh degree of the scale (G#) included.

Our teacher describes A7 as a “major” chord. It’s not. A7 is neither major nor minor, it’s a dominant chord. In context of the chord progression, though, it’s highlighting a chromatic descension.

As with the A7, the A9 is a dominant chord. And it’s almost the same, except that it contains the ninth degree of the scale (B, but an octave higher).

A standard major chord requiring three fingers. Watch the video for a detailed description of how to play it if you aren’t familiar with D already.

The first minor chord in this song. This is a standard minor chord and there’s a good chance you know how to play it already. A transition from D to Dm is kind of rare, but in context of this song, it’s anticipating another chromatic shift.

On the first time through, though, the song immediately goes back to the A after the Dm.

In this case, the F chord hints at the ending of the song. This is another standard two-finger chord and is easy to play.

What Makes This The Prettiest Ukulele Song In The World?

Obviously, music is subjective, and we’d be lying if we said there wasn’t a bit of “clickbait” at play here (with over 2.5 million views on the video, it looks like it paid off).

But here is what makes this chord progression interesting.

With the first four chords, it’s the notes in the chords themselves that are creating melodic movement. There is no movement in the bass.

There are plenty of songs out there featuring chromatic descension, including the infamous “Stairway to Heaven” by Led Zeppelin.

Then, we transition to a D. This isn’t unusual. D is a fourth above A, and even in a blues or jazz song this transition would be expected. The transition to Dm is slightly unusual, but since we have the context of chromatic descension already, our ears are starting to make sense of the pattern.

Finally, we come to the F. This chord isn’t used until the turnaround at the end, and that’s the only place it fits nicely. If the chord progression ended on the F, there wouldn’t be much resolution. It’s basically there to add a bit of a drama.

And that’s it! What this chord progression demonstrates is that you can have a relatively constant bass and add a lot of interesting chords and even a melody on top. This type of chord progression works great on a ukulele, and it’s applicable to a variety of songs.

We hope you enjoyed this deep dive into “the prettiest ukulele song in the world,” its chords, and a little bit about its inner workings.

Now that you know how to play it, see if you can come up with some variations on your own. See where you could incorporate something like it into your own songs, especially if you write your own.

We hope you had fun, and we’ll see you at Ukulele World again soon!