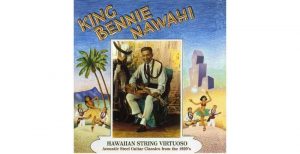 The sound of the ukulele brings a smile to so many faces, making you think about that island life. You can almost hear the waves and the birds chirping when you are listening to this Hawaiian music. It first rose to popularity in the 1920s and 1930s and has been steadily capturing the hearts of millions, inspiring many smiles and fond memories since.

Whether you are an avid fan of this type of instrument or just looking to start exploring ukulele music, there are quintessential albums and artists that you need to check out so that you can get a feel for this important cultural sound. These albums will help you explore the best of the best, from classic to modern. Read on for a guide to the five best ukulele albums of all time.

No list of ukulele music is complete without this album. It sparked one of the most popular and well-known ukulele songs of all time. When most people think of ukulele music, they think of “Somewhere Over the Rainbow.” With Kamakawiwo’ole’s calming voice, soothing melodies, and happy lyrics, there is no wonder this song has stood the test of time. Israel Kamakawiwo’ole is a legend.

This album is much more than just a one-hit-wonder. It is one of the most popular, best-selling Hawaiian albums of all time. Check out these other popular songs from the album:

Of course, the album ends with “Somewhere Over the Rainbow,” letting you reflect on life and the beautiful possibilities the future will bring long after the final chord.

Facing Future is a journey from start to finish about the beauty of Hawaii and how you can look to the future and evolve without losing what is special about the past and your cultural history. And, if you are looking for further listening, you can always check out the “Somewhere over the Rainbow/What a Wonderful World” medley to bring even more smiles to your face.

King Bennie Nawahi is one of the original ukulele legends and an absolute classic. This album features his recordings from the 1920s through the 1940s. His unique sound has shaped the genre for decades, thanks to the specific instruments he used to capture and create it.

Hawaiin String Virtuoso is the perfect gateway album for new listeners to see just how far ukulele music has come.

King Bennie Nawahi had a certain stage presence that can only be described as vaudevillian. He was over-the-top in the best ways. “Ukulele Benny” is the breakaway song on this album, representing all that makes King Benny Nawahi so special. Even after nearly 100 years, this album remains relevant and a staple for all those looking to listen to the best ukulele music.

Bennie Nawahi was not royalty. Instead, he earned the nickname King of the Hawaiian guitar and King of the ukulele. He helped to define a generation of sound at a time where Hawaii was just becoming a popular tourist destination. Much of his influence remains on many of the novelty tourist acts, and no album reflects this influence better than Hawaiian String Virtuoso.

The Folk Music of Hawaii by the Sons of Hawaii

When the Sons of Hawaii came on the market, they helped to completely revolutionize traditional Hawaiian folk music, uniting different influences for a brand new type of sound. They brought years of experience in the different genres below and combined them to create unique, cutting-edge music that defined the 1960s and beyond.

The Folk Music of Hawaii album focused on capturing the essence of what it means to be Hawaiian and the pride that these men felt of their heritage, which is why it resonated with so many at the time. It helped to share the traditional songs and language of the islands with a broader island, celebrating its tradition in a new and exciting way on a national platform.

Some called it a ukulele revolution, while others were proud to see the traditional Hawaiian music elevated on a national level while still preserving its roots. This album unites the harmonious melodies and lyrical genius of the band. It is still a huge influence on Hawaiian musicians, ukulele or not, today.

Guava Jam by The Sunday Manoa

Guava Jam was the sound of a new generation of Hawaiian folk music, and it was one of the hallmark albums of the second Hawaiian Renaissance in the 1970s. It helped advance a resurgence of pride in the Hawaiian culture, especially rising against a deep, systemic history built on colonization that the islands are still unpacking today.

The Sunday Manoa kickstarted Peter Moon’s career, who would later form the Peter Moon Band, which also received some level of commercial success.

Here, you will start to see his style, how it began with a strong understanding of the importance and versatility of this small instrument. Check out the song “Kawika,” and you will get a sense of just how powerful it can be. Guava Jam is a great ukulele album.

Part of the beauty of Jake Shimabukuro is his live shows. When you listen, you get the best of both worlds. It features live performances from Hawaii, Japan, Chicago, and New York, and this album peaked at number five on the Billboard world music charts. This is one of the more modern selections on this list, but it showcases how the ukulele sound transcends and evolves over time.

Shimabukuro has become a modern ukulele legend, and he is one of the fastest ukulele players in the industry today. He has a unique style that has been compared to Miles Davis with fast fingerwork that creates the most amazing melodic sounds. He has an incredible range, improvising and innovating on a classic sound, taking it to new heights for a modern world.

Shimabukuro is a movie composer, and he combines many different genres, including:

He has also been releasing educational videos to help others master the craft, helping ensure the legacy of the ukelele will live on for generations to come.

Not all ukulele music is used to simulate the island sound. Sometimes, it was used to accompany popular music.

This started in the 1920s, and nowhere was it more prevalent than with Cliff Edwards. He was a popular musician, and it helped catapult the instrument to new heights. It is a completely different sound, and that is why it makes an honorable mention.

Affectionately known as Ukulele Ike, Cliff Edwards was not Hawaiian, but that did not stop him from mastering the ukulele and bringing it to mainstream popularity. He is sometimes known as the godfather of the ukulele, and he inspired an entire generation to check out the instrument and add their chords to standard music sheets.

On Ukulele Ike Sings Again, you will find the song “Singin’ in the Rain,” which may sound familiar if you are a fan of old musicals. A movie by the same name featured Gene Kelly, Debbie Reynolds, and Donald O’Connor.

Edwards’ sound can be considered pop with jazz undertones. He sang some of the most popular songs of his days and was a broadway and movie actor.

He was very popular beginning in the 1920s and voiced several different Disney characters:

Edwards’ approach to the ukulele shows just how versatile this instrument’s sound can be.

There aren’t as many ukulele albums as I’m sure many of us would like. That said, the best ones out there are really good!

What other ukulele albums would you add to the list? I’m always open to hearing about more.