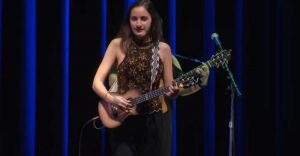 Far from being the cliched instrument you hear upon stepping off any plane to Hawaii, the ukulele has been enjoying a surge in popularity over the past few decades. Artists get their music out to the world through digital platforms, so we know many of the best female ukulele players.

Born in New York, Amanda Palmer first gained renown with her band The Dresden Dolls. Since then, she has also participated in the bands Evelyn Evelyn and 8in8. She plays the ukulele among other instruments in her solo work and claims to have added the uke to a live show once, kind of as a joke, but then enjoyed it, got good at it, and eventually recorded an entire album of ukulele music.

She has since branched out beyond music, giving a TED Talk and publishing a memoir, among other endeavors, including a podcast. She has one son with her husband, British author Neil Gaiman.

Florida-based Ari Chi has gained notice by using her voice and ukulele in live performances in conjunction with looping effects so that she can accompany herself as a one-woman band. Audiences very much enjoy this spectacle.

Chi herself says that she’s known for defying categorization. She’s more than a singer who plays uke— she writes and produces, as well, and she plays music from many genres, including soul and R&B, to name a few. She plays a Kala ukulele.

A friend started playing the ukulele, and Ariel McCleary thought, “I can do that, too.” Almost by accident, she found herself a YouTube star after she uploaded videos of herself which she shot only to track her progress as a player. The Internet noticed, and her channel, barely ten years old, has more than 27 million views. Along the way, she attended college in Ohio and went abroad to teach music in Spain.

While she is one of a bevy of young women writing and singing songs with a ukulele on YouTube, she records multiple tracks as she plays other instruments and sings backup vocals for herself.

This Hawaiian ukulele player has been a musician since the age of 4 back in 1992. As a multi-instrumentalist, she grabbed a uke sometime before adolescence and quickly settled on it as her instrument of choice.

As a player, she goes far beyond using the ukulele simply as an accompaniment for covers or funny little songs. She displays virtuosic technique and was an early adopter of the looping technology that allows her to accompany herself as she plays the solo ukulele. She plays from a broad palette of musical styles and has been honored for it: three awards from the Hawaii Academy of Recording Arts and honors from the Big Island Music Awards.

British-born Dodie (sometimes credited as Dodie Clark; born Dorothy Clark) has a huge YouTube following and has parlayed that into live performances around the United States and Europe.

She is equally known as a ukulele player, singer, and pianist. Dodie has released several self-produced EPs and published an autobiography, Secrets for the Mad, published by Simon and Schuster. Her music has garnered her awards and nominations for Song of the Year and Best YouTube Artist.

When you hear someone described as a multi-instrumentalist, you probably assume they play piano, guitar, maybe the sax. Gabby La La’s multiple instruments include the ukulele, of course, the theremin, the accordion, and a few other obscure axes.

Perhaps most impressive is her abilities on the sitar. She has a Sitar Performance degree from the California Institute of the Arts, and there aren’t many people in the world that can claim that.

She has released solo albums, toured in support of them, and often plays with legendary bass player Les Claypool. She has also played with Snoop Dogg and Jane Weidlin of The Go Go’s.

Born in 1918, Genoa Keawe is as synonymous with the ukulele as Hawaii, her place of birth, is. She made a name for herself playing and singing Hawaiian music, first performing as a professional in 1946. She drove a taxi to make ends meet before her career took off, recording with two labels before starting her own.

She is famous for her ukulele playing and her ability to sing a note and hold it for more than two minutes. Her 140 singles helped bring the ukulele and Hawaiian music into the mainstream of Western culture.

She never posted YouTube videos of her playing and singing in her kitchen or anything, but every ukulele player on this list and YouTube owes what they’re doing to Genoa Keawe. She was awarded a National Heritage Foundation Fellowship from the National Endowment for the Arts in 2000.

In 2016 at the age of 12, Grace VanderWaal came to the public’s attention by winning NBC’s talent competition show “America’s Got Talent.” While she started out playing and singing cover songs with her ukulele on a YouTube channel, she quickly started writing her own music. She went on to audition for the NBC show and win it by playing original songs.

She brings a distinctive, raspy voice to her music, and her arrangements of covers have garnered her some attention. She has played on numerous talk shows, toured with Florence and the Machine, had an album debut on Billboard’s 200 Albums chart (at number 22), and acted in a Disney+ show, “Stargirl.”

Since releasing her first album in 2005, Ingrid Michaelson has released eight more. She was born in New York in 1979 and attended Binghamton University and studied theatre.

While she plays the ukulele live, she is best known as a singer and songwriter. She has worked with Sara Bareilles, played for Barack Obama, and even appeared in a Broadway production of the musical “Natasha, Pierre & The Great Comet of 1812.”

Offering one of the more charming YouTubers out there, Julia Nunes first came to the forefront of that oeuvre when pianist Ben Folds requested that she open for him on several dates for his 2008 tour.

She plays original songs and covers by The Beach Boys, The Beatles, Queen, and many others, layering her performances to allow her to play several instruments and sing backing vocals. Nunes has released seven albums, played Bonnaroo with Weezer, and spent 2020 dedicated to releasing one new song per month.

Although she plays the ukulele, Kate Micucci has found fame as an actor. She has multiple television credits, including “Scrubs” and “The Big Bang Theory,” to name but a few. However, in many of her roles, her ukulele playing, as well as her singing, get incorporated into her performance.

As a comedian and ukulele player, Micucci plays with actor Riki Lindholme (also a veteran of “The Big Bang Theory,” where she played a woman after Sheldon’s heart) in the duo Garfunkel and Oates. While the duo’s songs are humorous, both women demonstrate that they can play their instruments well and have broad musical knowledge.

California-born Molly Lewis is mainly an Internet musician, finding her audience through YouTube and recording with other Internet musicians. She grabbed attention with ukulele covers of Lady Gaga’s “Poker Face” and “Toxic” by Britney Spears, the hook being that neither of those songs exactly screams “ukulele,” yet she made them work for her.

She has toured sporadically as a solo artist, often with other artists as she did with the “Ladies of Ragnarok” tour in 2012.

After learning fingerstyle guitar, Natasha Ghosh applied those techniques to the ukulele and began playing covers soon after that. She enjoys playing anime theme songs on the instrument, but she also sings sometimes, too. The Dutch-Indian musician supposedly swore off playing covers in 2021, focusing exclusively on her original songs.

Paula Fuga is as well known for her beautiful singing voice as for her ukulele playing. Shortly before beginning her professional career, Fuga traveled from her Hawaiian home to audition for the talent competition “American Idol.” She was not chosen, but has since gone on to thrive as a musician of worldwide renown.

Her first album, “Lilikoi,” got national attention, and since then, she’s been playing and educating people about the ukulele. She has collaborated with Jack Johnson, among others, and has performed at The White House three times.

Reneé Dominique hails from the Philippines, and since starting her YouTube channel in late 2012, she has amassed more than one million followers. She covers pop songs (notably, a cover of The Beatles’ “I Will” has more than half a million views) with her ukulele and smoky voice.

Britain gave the world Sam Brown in 1964, and she has given the world a whole lot of music since then. She released five albums between 1988 and 2007 when she ended her singing career due to losing her voice.

Not only is Brown an accomplished ukulele player and singer-songwriter, but she has also performed as a backing vocalist for some huge names, including George Harrison, Pink Floyd, Nick Cave, and Adam Ant.

She currently helms The Fabulous Ukulele Club, a collection of groups of uke enthusiasts that also provides ukulele lessons. This is just one of many ukulele clubs around the world.

Sophie Madeleine started out in Brighton, England, where she earned a master’s degree in Songwriting. She came to the United States and started a YouTube channel with over four million views of videos of her playing covers and original music.

She retired from music in 2015 after a five-year career and took a job as a copywriter for a British advertising agency. Her songs still occasionally appear in television commercials.

You simply cannot have a list of female ukulele players (or ukulele players of any gender) without Taimane Gardner appearing on it. After being discovered by Don Ho at the ripe old age of 13 around the turn of the 21st century, Gardner has released three solo albums and shows herself as a uke virtuoso with every performance.

She plays solo uke (sometimes a five-string model) and is sometimes accompanied by an acoustic guitar and a cajon. No matter what she’s doing, she displays technical skills far beyond her years and, frankly, beyond those of many fellow ukulele players. Gardner is equally at home playing rock or classical music, and even sometimes together.

Hailing from Malaysia, Zee Avi accidentally became a YouTube star when she posted a video for one person to see. He convinced her to leave it up after he’d watched it, and the Internet noticed.

A YouTube spotlight feature on a video she posted (planning on having that be her last video) led to her getting discovered by The Raconteurs, which led to some recording sessions that resulted in her 2009 debut album. She plays original music and covers on her YouTube channel, but her albums feature her own songwriting skills.

Many ukulele players offer something to the world, and we couldn’t possibly cover them all here. However, this is a solid sampling of some of the best female ukulele players from the past and today.

As the instrument continues to gain in popularity and get used in various musical styles, we will surely discover more great players in the years to come.