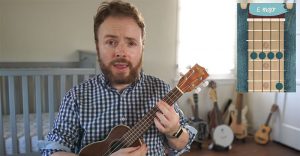 They say that some of the best music was inspired by heartbreak, loss, grief, depression… generally, emotions many of us would consider difficult or negative.

But at its core, music is a lot of fun. It’s one of the reasons so many people are so passionate about music.

And there isn’t a shortage of fun, silly, weird, or ironic songs our there. In this guide, we look at a bunch of funny ukulele songs you can learn on your uke.

“Sexy And I Know It” by LMFAO

A ridiculous, over the top song about being irresistible to women. And they say Rod Stewart thought he was god’s gift to women… I’m not sure he’s got anything on “Sexy And I Know It,” at least nothing as overt.

And the truly funny part is that, while it’s a three-chord wonder (like most songs on this list), you could create an intricate, beautiful, finger-picked arrangement that fools the audience. Which could make it even funnier. I had a friend that did exactly that with Britney Spears’ “…Baby One More Time.”

I don’t know if I’d be LMFAO, but at least I’d be laughing.

“Business Time” by Flight of the Conchords

It’s a shame the Flight of the Conchords couldn’t sustain their creative spree long enough to keep their TV show going. It was awesome. But I can appreciate that great comedy songs aren’t exactly easy to write.

But we are still left with a lot of great memories, not the least of which is “Business Time,” which is the furthest thing from suave, sexy, or smooth. Instead, it goes in the opposite direction, demonstrating just how unsexy sexy time could be.

If you bust out this one at a gathering, it’s sure to get a few laughs.

Psy’s “Gangnam Style” was the runaway hit of 2012, and at the time, it seemed as though it could pave the way for a K-Pop domination in North America.

The song itself is mostly about living the trendy life in Seoul, Korea. And it spawned a “horse” dance that was often imitated – even by the likes of actor and late-night show host Craig Ferguson.

I don’t know if it’s worth learning the predominantly Korean lyrics but bust into the chorus at a gathering and you’re sure to inspire a few chuckles.

“Cotton-Eye Joe” is just one of many 90s novelty songs that dominate this list.

It’s hard to find a better term for this tune than “redneck techno,” as it mixes electronic beats with speedy fiddle licks.

If there’s any theme we can derive from the lyrics, it’s that the narrator is jealous of cotton-eye Joe because he stole his lady. But that might be a little too deep for such a novelty.

Here’s another funny ukulele song. Carly Rae Jepsen’s “Call Me Maybe” was impossibly catchy, yes. And a fine example of what pop could be. It stuck out like a sore thumb amidst the brain-dead, drum machine, synth riff top 40 music of the time because it demonstrated musicality.

But it’s cheesy beyond belief. “Call me maybe,” sure, that’s believable. But “Before you came into my life, I missed you so bad?” That hurts a little.

So, this one’s funny ironically.

“Who Let The Dogs Out” by Baha Men

This song wasn’t a Baha Men original, but their manager was convinced they could make it a hit. And he was right. The Baha Men version is now the definitive version.

It kind of answers the question, “are dogs rich territory for euphemism?” And the result is embarrassing to say the least. I’m not sure the song serves any other function.

It is catchy but it was also overplayed. And it started grinding on people’s nerves. In that sense, it maintains a “special” place in our hearts. And with only three chords, it’s a pretty easy ukulele song.

There were a lot of weird songs in the 90s, and “Barbie Girl” is among the top-ranking ones.

To this day, there are still people who say it was a “great song,” which I don’t understand. It couldn’t be more obvious or vapid. To be fair, it was fun, too. And it’s funny, at least ironically.

If there’s a positive aspect to it, it’s that it invites you to be childlike again.

As with “Barbie Girl,” there are those who think of Eiffel 65’s “Blue (Da Ba Dee)” as a masterpiece, when it’s a better representation of random European 90s techno.

But the cringe factor is minimal compared to some of the other tunes on this list, which means it can make for a fun, nonsensical, knee-slapping singalong.

But it still begs the question… what’s with 90s songs and unintelligible, scatted choruses?

Chords in this song: B, Ebm, E

“Fish Heads” is a true classic from comedy rock duo, Barnes & Barnes. Much like “Weird Al” Yankovic, “Fish Heads” grew in popularity thanks to the Dr. Demento show. It even became the most requested song on the show. There was also a bizarre music video that went into regular rotation on MTV in 1980.

This one’s a bit of a throwback, but in the right crowd, it will get a raucous reaction.

Chumbawamba’s “Tubthumping” mostly falls under the category of “weird,” as it was a mockery of the North American partying sports bar lifestyle. Ironically, it was embraced as a party anthem in the late 90s, by the very crowd that was being mocked.

For the most part, it’s a three-chord wonder, just as Chumbawamba was basically a one-hit wonder, at least internationally.

Why is Trio’s “Da Da Da” funny? For one, it’s infectious beyond belief, and for another, unless you understand German, the lyrics don’t make a lick of sense. Even the English version is basically nonsense.

But it’s endearing, because of that familiar I – IV – V chorus.

“How Bizarre” by OMC

“How Bizarre” was this song? If I were to interpret the lyrics literally, it’s basically about a group of friends piling into a car to go on a road trip. They get pulled over by a cop. And then they go to the zoo. I’m not sure what happened to the cop. The topic is abandoned because it probably wasn’t as interesting as the animals.

So far as weird songs (and music videos) are concerned, it’s up there.

I don’t think the A&R at Mercury/Polygram records were mistaken in thinking they might be able to bank on teeny bopper boy band Hanson long-term.

The problem is that their breakout hit, “MMMBop,” was nonsensical and unintelligible. Catchy, yes. And it gets stuck in your head. But it’s also what spawned a legion of Hanson haters and satirists.

It’s a song about friendship… yeah, that’s it. It doesn’t matter. It’s a funny song, if only because of the “scatting” in the chorus. But let’s not compare Hanson to jazz legends. Please.

“Macarena,” of course, is perhaps better known for the dance it spawned. Yes, by some, it is considered a complete abomination. But they seem to be outclassed by the legions who still remember how to do the dance, whether it’s at the club or a dance party.

Yet another three-chord wonder that stirs emotion in everyone – positive or negative.

Sure, “Mambo No. 5” was catchy and fun… the first time you heard it. Then, it fast became a source of irritation.

The only good part about it, really, is the backing track, which is a throwback to big band and jazz.

Aside from that, the song is just about a series of one-night stands. Yay. So, it’s funny, in an ironic way.

To this day, Right Said Fred’s “I’m Too Sexy” is highly recognizable, and undeniably funny, if for nothing else, because of how ridiculous it is. You can easily imagine it being used in a comedy film.

Ultimately, it’s just another flavor of bubblegum pop, at least as I see it.

“Two Princes” by The Spin Doctors

You’re at a party. You bust out your ukulele to play a few songs. Everyone sings along and is having fun. Then you play the opening notes to the faux funk metal “Two Princes,” and… everyone groans. Except for that one guy who knows every word and starts singing his pitch perfect karaoke rendition.

Practically everyone’s been Rick-rolled. But it would almost be safe to say, “Two Princes” is the 90s equivalent of “Never Gonna Give You Up.” Like “MMMBop,” it even comes with unintelligible scatting!

It would be a lie to say it’s not fun to play it ironically though.

People love to dance. And to dance, they need music. And it’s much more fun to dance to “Sexy And I Know It” compared to something more serious like “Stairway to Heaven.”

It’s worth adding a few silly songs to your repertoire, too, as they tend to be crowd pleasers.

What makes a set list great is the rise and the fall, not just the fall.