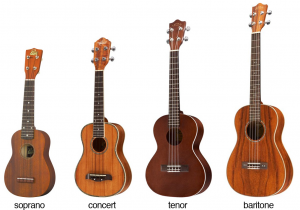 Buying your first ukulele could be a daunting task, considering they come in different brands, sizes, and shapes.

However, the uke, unlike other instruments, is more straightforward in this area because each size isn’t considered a different instrument. It’s still a uke but with some little differences to be able to suit different players and situations.

The Reason Behind The Different Sounds

A couple of inches can indeed change the sound of the uke. The sound the uke produces depends mainly on the surface area where the sound resonates plus the scale length.

As a general rule, the larger the surface area is, the higher the volume. For this reason, larger ukes have a higher pitch with a deeper sound.

Scale length is the distance between the nut and the saddle where the strings are attached, so it affects the tension and spacing between frets.

For one thing, when you increase the length of the frets, it gives you more comfort in positioning your fingers, along with more options for chords. For another, the longer the scale length is, the more tension there is, which in turn grants the string more room to ring, producing a brighter sound. And the opposite is true.

The Four Main Sizes Of Ukulele

The soprano ukulele is the smallest one of the main four and is known to be the traditional one. Hence, it gives you the sound you’re more familiar with as the sound of the uke.

A soprano uke has a small body and neck, so it tends to be lightweight and easy to hold. It follows the standard tuning of the primary uke: GCEA.

Also, the sound produced is mainly on the soft and bright side since there’s not enough space for the sound to resonate. Given the small size, It has around 12 to 15 frets, and it doesn’t work best with projections and some of the bass frequency.

Perhaps it can be suitable for strumming some chords, but it isn’t convenient for playing single notes as there is not enough space.

Being larger by only one inch gives concert ukeleles more advantages over soprano ones. Concert ukes have around 15-20 frets and usually more space between them.

Not only does it accommodate a broader range of chords, but it’s also suitable for fingerpicking and playing single notes while keeping the advantage of being lightweight and easy to hold.

Like the soprano uke, it has the standard GCEA tuning. However, concert ukuleles projects better, so they produce fuller sounds with warmer tones.

In addition, unlike some sopranos or other smaller ukes, it doesn’t get out of tune if you move up the neck.

With the addition of three inches to the concert uke, we get a better-sounding one with more frets, ranging between 15-25. Though it’s also a little bit heavier.

Tenor ukuleles are known for their deep, complex sound and wide frets. That’s why they are used for producing more advanced music, besides being the one favored by most stage performers.

Also, like the soprano and concert ukuleles, they tend to have the standard tuning: GCEA. Nevertheless, they have more mid-range and bass.

The biggest and heaviest one of the main four ukuleles is the baritone, though it’s still smaller than an average-sized classical guitar.

Perhaps it could be the best choice for someone who wants something between a classical guitar and a simple uke since it has a deeper and more bassy sound than the other three types.

The notable difference is that it has a DGBE tuning, which is five steps lower than the standard, or in other words, it is like a small guitar missing the two top strings.

Hence. If you are a beginner, you need to watch out for the difference in tuning because mostly, you’ll find the ukulele notes written with the usual GCEA tuning.

Choosing The Uke That Fits You Better

When you’re selecting a uke, keep in mind the differences mentioned above, in addition to some factors like your height and hand size.

Generally, if you don’t have any preferences, the safest choice would be the concert uke. It’s neither too big nor too small. Also, it’s good for chords as well as single notes and fingerpicking.

If you are tall- six feet or more- with big hands, Tenor would be better for you as it’s larger with more spaces between the frets. Soprano ukes fit better with kids or women with small hands.

Beginners should stick to one of the first three sizes because, as we said before, they have the standard tuning. Most uke notes are written in the standard tuning, so if you choose the baritone ukulele, make sure that you want this one specifically and know how to deal with the difference.

Finally, making up your mind can be quite tricky, but there’s no rule that says which ukulele is the best.

You don’t have to know how to play to determine which size would be better for you. Just choose the size and weight you’re comfortable with while keeping in mind the other differences we pointed out.