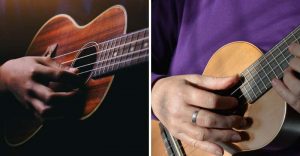 For those new to the world of ukuleles, the idea of different types of ukuleles can seem like a complete mystery. With several sizes, keys, and strings thrown at you, it can be challenging to figure out.

This quick guide will cover concert and tenor ukuleles and the primary differences between the two types. We will also answer a few frequently asked questions regarding these two instruments and how they get played.

What Is a Concert Ukulele?

In addition, the increased range led to ukulele music becoming more complex, and professional ukulele players got compared to professional acoustic guitar players. The body of the concert ukulele is 23 inches long (compared to the soprano at 21 inches).

The scale length for the concert ukulele is 15 inches (compared to 13 inches for the soprano). Scale length refers to the string’s length between the instrument’s nut and bridge, affecting the sound range that the ukulele can produce.

What Is a Tenor Ukulele?

A standard tenor ukulele has four strings, but some variations in the size (called taro patches) contain six strings in paired couples (called four courses). The four courses refer to the pathways of the four-stringed standard ukulele. On a six-stringed ukulele, two strings follow each of the four pathways. Five-string tenor ukuleles exist but are very rare.

Concert and tenor ukuleles share the same tuning, scales, and chords. Both sizes use the standard GCEA ukulele tuning.

Although the concert and tenor ukuleles are the same in their basic construction, general sound, and how they get played, the primary differences between these two types of ukuleles are their size, difficulty level, scale length, range, and price.

The concert and tenor ukuleles are accessible to beginner players, but the concert is generally considered a more beginner-friendly instrument. The sound is similar to the classic ukulele sound everyone knows from the soprano ukulele, but the range is a bit larger, and the tone is clearer.

The tenor ukulele is known as a professional instrument, as it gets used by many professional ukulele players. You can do more with the tenor because of its extended range and deeper sound. In addition, the larger size is suitable for people with larger hands, who may struggle a bit with the more petite soprano and concert sizes.

Scale length measures the string length between the nut and the bridge. The scale length affects string tension and fretboard length. A concert ukulele has a standard scale length of 15 inches, and the tenor is 17 inches long.

Because the tenor has a longer scale length, the string tension is higher with the tenor than in the concert. The frets of a tenor also have wider spaces than the concert, so reaching higher frets is easier on the tenor.

The tenor ukulele also has a more extensive range. The tenor has a note range of G3 to D6, and the concert’s range is C4 through C6. This range difference means the tenor can reach lower notes than the concert.

While both concert and tenor ukuleles reach into the thousands of dollars for top-tier instruments, tenor ukuleles are generally a bit more expensive.

Below are the common and uncommon sizes of ukuleles available.

The common sizes of ukuleles and their note ranges are:

The uncommon sizes of ukuleles and their note ranges are:

Here are some frequently asked questions regarding concert and tenor ukuleles.

What is the most popular size ukulele?

The tenor ukulele is generally more prevalent among professional players as it has a wide range and extended frets.

Can you put concert ukulele strings on a tenor?

When using concert ukulele strings on a tenor, the sound will be brighter and possibly lighter or quieter than with standard tenor strings.

The opposite switch, putting tenor ukulele strings on a concert, is typically not recommended. The strings are thicker, and the tension is lower, so players may face issues with an inconsistent sound and possible thudding.

Which type of ukulele is best for beginners?

The soprano ukulele is the most beginner-friendly size due to the difficulty level and price. The tuning for the soprano is the standard GCEA tuning, so sheet music and tabs generally get catered to this tuning, so you can easily find your favorite songs.

The strings of the soprano are relatively thin, so for players new to string instruments, it’s easier to press down on the frets when compared to the slightly thicker gauge on the strings for concert and tenor ukuleles.

Is a tenor ukulele tuned the same as a concert ukulele?

The tenor and concert ukuleles use the same GCEA standard tuning. Because of this, the two instruments share the same scales and chords. However, the tenor ukulele has three alternate tunings, ADF#B, DGBE, and a lower DGBE.

Can I play the concert ukulele with small hands?

Many people are surprised to find out there are different types of ukuleles. When we imagine a ukulele, we often think of the small soprano ukulele that has been the most popular instrument within the category.

However, there is a world of ukulele information, including the four primary sizes of ukuleles. As explained above, the concert ukulele is the second smallest type, and the tenor ukulele is one step up in size from the concert.