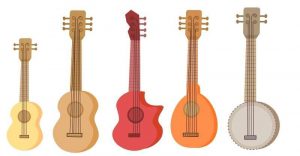 There are 13 primary types of ukuleles on the market, but which is the best choice for your music? Here are the different types and what sets them apart from each other.

The soprano ukulele is the most common and popular ukulele on the market. A typical model is 21 inches long and tunes G-C-E-A for its notes. Although many people worry that this instrument is too small, the reality is that most people can hold and play this instrument well.

The soprano is the smallest of the four main types of ukuleles, and as it’s affordable, it’s a good learning instrument. However, size correlates with volume in instruments like these, so it may not be a good choice for concerts or other performances.

Soprano ukuleles are mostly standardized but may have between 12 and 15 frets depending on the exact styling. Sopranos are also known for going out of tune faster than other ukuleles, but they’re easy to get back in tune, too. That’s another reason that sopranos make good training instruments, even if you might not use them in a performance.

Concert ukuleles are the second standard size. Like sopranos, they tune G-C-E-A, but they’re slightly larger at 23 inches. This size gives them more bass and volume than their smaller cousins.

As the name implies, concert ukuleles are better for performances than sopranos. They typically hold their tune longer (although all stringed instruments need regular tuning), and the added volume makes it easier to reach the back of a crowd. Concert ukuleles are also small enough for easy transport, making them better for traveling than other options.

Taller people often prefer the concert ukulele because it has more room between its frets. This room makes it easier to play with larger hands or fingers. If you’re concerned that a soprano is too small, try looking here first.

Tenor ukuleles are noticeably larger than soprano and concert ukuleles, coming in at about 26 inches total. This ukulele is significantly louder than its smaller cousins. It also has far more bass, giving it a much fuller sound. Like the other standard ukuleles, tenors tune G-C-E-A, so you can play the same songs.

However, tenors depart from smaller ukuleles because they have longer necks and support higher notes. This means they can play songs you literally can’t do on a smaller instrument. That’s a major distinction for musicians, so professionals often get at least a tenor instead of going any smaller.

Outside of its other characteristics, it’s often possible to tune a tenor to D-G-B-E, which further expands the range of possible songs you can play on it. The obvious downside to a tenor is that it’s larger and heavier than smaller ukuleles, which makes it harder to transport.

Tenors are the most flexible option of the four primary sizes (soprano, concert, tenor, and baritone), so it’s a good default if you want just one instrument.

Baritone ukuleles are the largest of the four primary styles, coming in around 30 inches. This makes them about 50% larger than the common sopranos. These are a popular choice for bands, where their louder volume can mesh well with other instruments instead of getting lost in other noise.

Baritones tend to have 19-21 frets along the neck and tune to D-G-B-E. For context, these are the same as the four highest pitches on a typical guitar, so you can get some overlap there.

Overall, baritones have a noticeably deeper sound than the other common ukuleles, so they’re not a good choice for songs that require higher notes. These instruments are better for experienced ukulele players and may not be a good choice for first-time players. However, their tuning means they’ll be familiar to guitar players, so they can work as a transition instrument.

Banjo ukuleles are the first non-standard option available to ukulele players. Unlike typical ukuleles, which have a standard figure-8 shape, banjo ukuleles are immediately distinguishable by their circular bodies. Some people refer to these as banjoleles, although that’s not an official term.

Banjo ukuleles can play music for standard ukuleles but don’t work for banjo-specific music. They stand out from other options because they have a loud, bright tone with minimal sustain. They’re much more plucky, working well for rhythmic songs, but may not work for many modern styles.

Banjo ukuleles are a specialist instrument and not a good choice for beginners or anyone learning to play music for the first time. It takes skill and good song selection to bring out the real potential of these instruments, but some musicians pick them up specifically for the challenge.

Bass ukuleles have a rich, deep sound, tuning to E-A-D-G. This tuning matches standard bass instruments and a guitar’s four bottom strings, so it’s relatively easy for people with experience on either of those instruments to adapt to a bass ukulele.

However, as these are noticeably smaller than regular bass, they also have thicker strings to get the right notes. The result is that they tend to have a much lower string tension than many musicians are used to. As a side effect, this means lower volume, so bass ukuleles almost always need to plug into an amp for full effect.

Despite these characteristics, bass ukuleles tend to sound great when set up correctly. They’re more portable than a typical bass, and since they go through an amp, they work relatively well in group environments.

Cutaway ukuleles are a variant of the other options on this list. They’re fundamentally similar in sound but cut out a part along the right shoulder. Removing a few inches of the body in this area makes it easier to play the notes on that part of the fret, allowing for more-complex songs.

Whether to get a cutaway ukulele or not is a matter of personal preference. Many casual and professional players buy their instruments with this variant, while others prefer the appearance of the standard models.

It’s worth noting that ukuleles are much smaller than similar instruments like the guitar, so it’s inherently harder to play some notes on them. Cutaways specifically address this.

Like electric guitars, electric ukuleles have a solid body and rely on electronic systems to produce sound. They have almost no volume on their own, so expect to plug in an amp for any kind of performance.

Electric ukuleles duplicate many of the other instruments on this list. It’s possible to find an electric version of the four common sizes and also for other options like the guitar and bass ukuleles.

Many people make music electronically these days, so professional musicians often pick these as their first choice.

You can also find an acoustic-electric variant, which produces sound normally when unplugged but has connections for digital sound transfer. These are among the most flexible ukuleles available, so they’re a good choice for almost everyone.

Guitar ukuleles are a hybrid instrument. They usually come in baritone size, and unlike other ukuleles, they have six strings instead of four. Most guitar ukuleles have an A-D-G-C-E-A tuning, which is essentially adding two bass strings to a typical baritone.

Outside of the size difference, playing a guitar ukulele is almost identical to playing a typical guitar, except that it has a noticeably higher pitch. This change can make it an excellent choice for anyone who wants to transition between the two instruments.

Also, guitar ukuleles may be the best choice for specific note needs. They have a higher pitch than a guitar but a lower pitch than a typical ukulele, serving as a good bridge between the two.

Harp ukuleles are one of the most unusual variants of the traditional ukulele design. Unsurprisingly, they’re better for experienced players rather than first-time learners. Although it’s possible to play them like a regular concert or tenor, they have an additional extension with unfretted strings.

Playing both sections at once requires a lot of practice and skill, but you can create more-complex sounds with a harp ukulele than any of the other options on this list.

The main downside is that it can be hard to find a good one. Since they’re not as popular as other variants like the banjo ukulele, some stores don’t stock them. They’re also very intricate, making it much harder to make them than a regular ukulele.

However, improvements in manufacturing techniques mean it’s easier to make these than before. So you may see more of these in the future, but expect to place a special order if you want one right now.

Pineapple ukuleles are a variation of the standard body style. Unlike the figure-8 shape common to most, pineapple ukuleles have more of a solid oval shape. The difference in the body creates a louder and stronger sound than typical ukuleles, which makes it better for group performances.

Pineapple ukuleles are most common in soprano and concert sizes, where the louder and bolder sound is important. Tenor and baritone ukuleles don’t need as much help, so you don’t see as many pineapples in those sizes.

Resonator ukuleles are immediately obvious on sight thanks to the circular metal plates they have. Like their inspiration, resonator guitars, resonator ukuleles transmit sound to special metal cones instead of a typical sounding board. This makes them noticeably louder while also providing a more distinctive tone in the traditional G-C-E-A tuning.

Resonator ukuleles are available with wood and metal bodies. The metal bodies are somewhat rarer but have a noticeably brighter and louder sound. This makes them somewhat similar to banjo ukuleles but with better volume.

Resonators aren’t necessary for most solo performances, although they may be a better choice if you’re going to play in a particularly large area. They’re better for playing in larger groups.

Sopraninos are the smallest ukuleles most people will ever see on the market. At just 12 inches, it’s a little more than half the size of a regular soprano. Sopranino typically has ten frets.

Outside of the occasional corner case for recording, sopraninos are too small for most people. They’re not big enough to provide real volume, and the frets may be difficult to play if you have larger hands. However, they may be a good choice for shorter-than-average musicians.

Most ukuleles are made with wood or laminates, all of which can affect the final sound. If you have the chance, consider testing different tonewoods, as these tend to have a significant effect on an instrument’s sound.

Some ukuleles are also available with metal components. These notably include resonators, which have all-metal versions, but you’ll also see metal on electric variations of most ukuleles. Certain styles, like harp ukuleles, are generally wood-only.

Avoid plastic ukuleles. These are always inferior products, and while they may be affordable, they’ll break much faster and don’t produce anywhere near the same quality of sound as genuine wood or metal ukuleles.

Most ukulele strings are nylon, which is affordable and offers a warm tone that works great with instruments in this size range. However, nylon strings are bad at holding a tune, so you should expect to retune them each time you play.

Fluorocarbon strings have a much brighter sound, but they hold their tune noticeably better than nylon. These are a good choice for higher-end instruments.

Finally, many ukuleles come with Nylgut strings. These are similar to nylon but have a slightly brighter sound and hold their tune much longer. These are affordable middle options for musicians.

Ukuleles are much more than tiny guitar-like instruments for people who want to have fun with music. They’re well-established instruments in their own right, available in a variety of sizes and styles to help meet different musical needs.

If you’re still not sure which of the types of ukuleles to buy, try to visit a store and test them in person. There’s no substitute for hearing an instrument in person, so that’s ultimately the best way to decide between them.