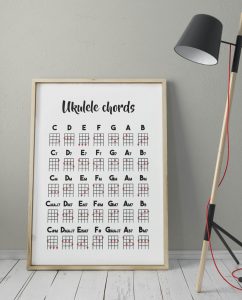 As a beginner, it might be a little confusing when you first check out different chords and try to understand how to read the diagram.

For a majority of diagrams, it is not really hard to get the diagram.

However, some symbols won’t be intuitively understood, especially if you are a self-learner.

The good news is, the minute you start grasping how these diagrams work.

You will be able to learn a lot of chords in no time ergo; it won’t be long before you find yourself playing new songs.

So stick around till the end of this article, and hopefully, comprehending ukulele chords will become a lot easier!

N.B: Some chords don’t start at the nut. In this case, you won’t find a thick black line at the top of the diagram. Instead, there’s a horizontal line with a number on the top right or the top left.

This number corresponds to the number of the fret acting as if it’s the nut.

For example, if you check the G major chord, you should place your index finger on the second fret of the c string.

The middle finger should be placed on the second fret of the A string, and lastly, you need to place your ring finger on the third fret of the E string.

Because you will find an open circle opposite to the top string, you should conclude that you will be hitting this string as well while playing the G major chord.

Is It Possible to Play a Chord Without Strumming All Strings?

YES, it’s actually something that a lot of beginners skip, especially if they don’t take any lessons.

Somehow, there’s a common faulty idea that the strumming hand is always to be hitting all the strings.

However, some chords have “muted strings. “

When a string is muted, it should not be played at all.

You will find an “X” mark on top of the diagram opposite to this string.

An example of a chord that has a muted string is D#m9.

If you have a bar chord, it means you should be pressing down multiple strings at the same time.

A lot of times, you will need to bar all the strings, using them as a ukulele capo.

Usually, you only need to use your index finger to get it done. Yet, rarely, you can use other fingers to bar a chord as well.

Lastly, there’s another – less professional – way to understand how a chord works.

You won’t find it in most ukulele books, but you will find it a lot if you are trying to learn a song over the internet or watching a YouTube tutorial.

This is what they call “Text Chords.”

It’s merely a way to simplify a diagram.

Numbers are used to indicate where each finger should be.

Each number represents the fret number on the specific string.

The order used for the strings being GCEA.

So if you look at the examples mentioned above, if you want to use numbers to demonstrate a G chord, it will be “0232″.

So this is basically everything you need to know to be able to read any ukulele chord diagram you want to learn. Happy Strumming, folks!