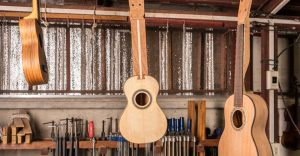 Even if not for Hawaii, the number of ukulele makers in the States is impressive to say the least. Premium grade instruments have found their way into the hands of many recognizable pros and collectors, and there are even luthiers serving the beginner and intermediate markets.

If you’re thinking about getting a handmade instrument, it’s best to keep in mind that they are often costly, at least compared to their mass-produced counterparts. But they are usually worth it, especially if you’re looking for a workhorse that could last you a lifetime.

Here are some of the top ukulele luthiers in the United States.

Beansprout Musical Instruments makes handmade ukuleles and banjos using domestic materials. If you’re looking for traditional craftsmanship and want a uke with a classic look, Beansprout might just be the right choice for you.

On their website, you can choose from a mix of standard and special model ukuleles and place an order too. There are plenty of pictures and videos of their products, so if you’re wondering how they look or how they perform, you can get more info right on their site.

Beansprout also has a store where you can buy straps, strings, case tags, instructional books, and other accessories and trinkets.

Artists like Dave Matthews, Kevin Carroll, and Steve Varney have been seen with Beansprout instruments, which certainly lends some credibility to their name.

Black Bear Guitars And Ukuleles is a one-man operation run by Duane Heilman, who has been designing, repairing, and building various stringed instruments since 1991. Heilman has studied widely, drawing inspiration from traditional and modern ukulele builds in crafting his own handmade instruments.

He creates one-of-a-kind instruments only and checking out his gallery (Ukulele Showcase) will give you an idea of the different style of ukes he’s crafted to this point (often colorful with unusual body designs).

In addition to ukuleles, you can also find guitars, banjos, violins, art, and other items Heilman has created on his website.

One look at the Rick Turner Guitars website says a lot – this Turner guy sure makes some fun looking instruments! And they don’t just make ukuleles, they also make guitars and basses.

What’s most unique about their ukes is the unique headstock design, not often seen on ukuleles. But they also offer tenor and concert jumbo body ukes – something you probably won’t find elsewhere. Round that out with a player’s sound hole and you’ve got yourself some unique ukes!

Rick Turner Guitars is well established, and their products are available at a variety of dealers, including Heartbreaker Guitars, Willcutt Guitars, and DHR Guitar Experience.

Getting a custom uke made by Rick Turner Guitars might be an uphill battle unless you’ve got a bag full of cash or an established brand, but their unique instruments still deserve a place on this list.

Mya-Moe prides itself in creating custom, professional grade instruments using domestic and imported hardwoods. Their instruments have been seen in the hands of the likes of Ben Lovett, Ben Wahamaki, Dave Matthews, Eddie Vedder, Jeff Stinco, and others.

With a strong focus on tone and playability, they make several common and unique models, including the classic four-string uke, a resonator ukulele, and six-string uke (kind of like a guitar uke).

Their website is a tad hard to use, admittedly, but you can find plenty of photos, learn more about ukuleles, and order an instrument while you’re there.

Oceana Ukuleles is the creation of Zacchaeus Steimle. Founded in 2008, the company mostly specializes in high-end ukes, ranging from $990 all the way up to $3,500 (and probably beyond). What makes their ukes special, of course, is that they are handmade, and tend to utilize high quality woods and parts.

Their instruments have received praise from the likes of Christian guitar legend Phil Keaggy and Joe Foreman of Switchfoot.

Their website also features an extensive gallery, a look inside their workshop, and a store.

Lichty Guitars is owned by luthier Jay Lichty, who turned his hobby of making ukuleles into his passion. His love of the craft is evident from the fact that in addition to ukuleles, Lichty makes guitars, fiddles, and violas.

If you order a uke from Lichty, you get to decide the model, tonewoods, and other options (binding, rosette, armrest bevel, side soundport). Have a look at the galleries and you will see that his instrument builds are quite stunning.

The site also has a handy price calculator, so you’ll get a solid estimate of what your custom uke is going to cost before you buy it.

The first Pohaku Ukulele was crafted in Hawaii in the early 90s. Today, they are in Berkeley, CA where Peter Hurney builds 20 to 30 instruments per year. Hurney has created ukes featuring a variety of styles, be it vintage classical, art nouveau, art deco, modernist steam punk, or otherwise.

Pohaku instruments have been seen in the hands of Bliss Blood, Craig Robertson, Tippy, and others.

Their website has a gallery full of their unique creations, ukulele tech tips, a store, and a list of other things Hurney has made.

Davidson Ukuleles offers handcrafted ukuleles made from unusual woods. They will customize your ukulele to your liking, whether it’s woods, the neck, sound, high G or low G, and more. They even work with rare woods like Lucky Strike redwood.

You can get a sense of the types of ukes they create in their gallery, as well as the unique finishes they’re able to achieve using rare woods.

Owner Philip Davidson is a fourth-generation woodworker, and his love of woodworking and music makes him the ideal candidate for realizing custom ukulele instruments.

Jack Maclay handcrafts Hive Ukuleles, which are built with tone, playability, and aesthetics in mind.

Maclay offers two models of ukes: The Hornet and The Honey Bee. The Hornet is his most popular model, and each one is voiced individually, and crafted using the best materials. The Honey Bee is a versatile uke, designed with self-accompaniment and fingerstyle in mind.

If you want to see photo and video samples of their ukes, you can find them right on the website. They also allow for ordering with various custom options to choose from.

Iriguchi Ukuleles was started by a husband-and-wife team. “Iriguchi” is a Japanese word meaning “entrance,” and their goal is to craft special ukuleles. While their ukulele designs are rooted in tradition, they are not constrained by traditions in any way. If anything, their ukes are quite distinctive.

Some of their models or “styles” include keystone, semi-hollow, and archtop. These all look like a lot of fun to play!

If you want to get a more in-depth view of their design philosophy, types of ukuleles they build, and even what their instruments sound like, you have but to visit their website for more info.

The ukulele has worldwide recognition and is a popular instrument across the globe. In this section, we’ll look at several luthiers you can find abroad.

TinGuitar.com founder Rob Collins boasts 30+ years as a musician and has a working knowledge of what musicians are looking for in their instruments.

In addition to ukes, Collins also makes tenor guitars, electric and acoustic mandolins, and even other instruments like biscuit-tin banjos, cigar box guitars, and diddley-bows.

You can check his shop for inventory and order online if you wish.

FV Guitars & Ukuleles is owned by Francesco Verginelli (thus FV). FV makes ukes, guitars, and basses, with an extensive collection of ukuleles. Their instruments are nothing short of unique and beautiful made with high quality woods and parts. Check out the pictures on their website for yourself and see.

The site features some in-depth information on woods, tools, design, and even finishing. For those interested in learning more about how ukes are made, this should prove a goldmine to explore.

Zeigenspeck German Custom Ukuleles is an award-winning ukulele maker. Their instruments are quite distinctive, especially the tenor Harp-E model, which is an electric harp ukulele. It’s not a cheap instrument by any means, but it’s got a great sound, and should present even experienced uke players with a new kind of challenge (with the addition of bass notes to play).

They also have other electric instruments; in case you like the idea of being able to take your uke out to open mics and gigs and plugging in.

Zeigenspeck’s website also has a gallery, store, guestbook, and information on machine heads.

What To Look For In A Luthier

Trying to figure out who you want to work with?

Whose instrument would be the right pick for you?

Here, we’ll look at a few factors you should consider when shopping around for a luthier.

Obviously, we’re going to expect a certain level of experience and proficiency. This doesn’t mean the builder necessarily needs 30+ years of experience under their belt to be competent (although that can never hurt), it just means we need to make sure they can deliver on their promises and build quality instruments.

Some luthiers are musicians themselves. This might be important to you, it might not be, but again, there’s no harm in looking for it.

What media attention has the luthier gotten? Again, this doesn’t necessarily mean they must have extensive TV or radio coverage to be valuable. But it never hurts to look at quotes and testimonials, video clips, and of course, mentions on social media to get a better sense of what they’re about and what people are saying about them.

In this case, media also refers to the media they have on their website – photos, videos, audio clips, and anything else they’ve managed to gather to share with potential buyers.

This isn’t everything, but it can sure give you a better idea of what the luthier is capable of, what to expect, and whether they can make exactly the type of instrument you’re looking for.

Obviously, there’s no such thing as a five out of five business. Even McDonald’s and Starbucks have haters, and they are among the biggest businesses in the world. No one has a perfect track record.

Likewise, there’s no luthier with perfect reviews. If they have five-stars, it’s probably because not many people have reviewed their product yet, or because they’ve found a way to game the system.

It can’t hurt, though, to find a luthier with a high rating. It gives you a sense of assurance when you’re thinking about working with them.

If you are looking to get a handmade uke, there’s a good chance you’re a collector or more experienced player. These instruments generally carry a bit of a price tag that would be harder to justify for the beginner or intermediate player.

That said, you often get something you just can’t get with mass-produced instruments, whether it’s attention to detail, tone and playability, craftsmanship, unique and high-quality materials, or otherwise. Usually, you also get a level of personal service you just wouldn’t be able to get with big brands.

So, enjoy your hunt and happy picking!