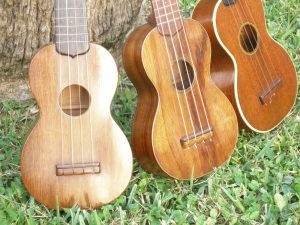 When shopping for a ukulele, it can be quite easy to get overwhelmed with the different options available on the market, especially if you’re a beginner. Not to mention, the comparison is far from straightforward, with each ukulele made of a different wood type, coming in a different size, made by a different manufacturer, and the list goes on.

In this article, I’ll take you through the different ukulele wood types since I believe wood is the most vital element to understand when shopping for a ukulele. After all, the wood forms the ukulele’s body, which ends up emitting the vibrations that lead to sound production.

By the end of this guide, you’ll be able to make a much more informed decision on which ukulele wood to opt for, and accordingly, you’ll narrow your ukulele selections down tremendously! Let’s get into it.

What Are Ukulele Tonewoods?

First things first, when you hear the term “tonewood,” we’re referring to the woods incorporated in an instrument’s construction. Why would a manufacturer choose to incorporate one specific blend of tonewood over another, though? The answer is simple: they affect how the instruments sound.

In a ukulele’s case, the wood choice can highly impact how resonant the resulting sound will be. Accordingly, your own choice of ukulele wood material will also depend on what sounds you’d love to hear out of your ukulele. You may choose to opt for a ukulele that features a combination of tonewoods, or you can go for one that features an exclusive type of wood.

Which Wood Is Best for Ukulele?

That’s probably the question you have on your mind. However, is there such a thing as the “best” wood? I prefer to ask it this way: which wood is the best for who? With that in mind, let’s discover the most common ukulele wood types and what sets them apart from one another.

Mahogany genuinely shines when it comes to soft and warm, focused tones that you would traditionally expect from a ukulele. It’s all about mid-ranges and frequencies, so if that’s the sound that appeals to you, you won’t find better than mahogany to grant it to you.

For that reason, mahogany essentially takes the lead when it comes to musical instruments. Especially in the ukulele world, you’ll find that the majority of ukulele necks are made of mahogany thanks to its strength when it comes to lower weights. Mahogany wood top, back, and sides are also widely available in mid-range to high-end ukes.

I wouldn’t say mahogany is extremely dense; it’s significantly less so than other woods like rosewood or exotic woods, but it’s still a hardwood. It’s not as soft as spruce, cedar, and the likes.

I find mahogany super convenient for beginners. It’s budget-friendly, aesthetically pleasing with its attractive brown shade, and produces sweet, bright tones that encourage you to pursue the ukulele further.

Rosewood speaks value on so many levels. Just by a glance at its unique brown color and attractive grain finish, you’ll get hooked. Rosewood is one of the strongest and high-density tonewoods, which is why it’s also on the pricey end of the price range.

However, it’s worth every penny and produces a very bright, warm, rounded sound with unbelievably long sustain that accentuates highs and deep lows.

The main two types of rosewood you’ll find are Brazilian and Indian. The Brazilian one tends to be the higher-priced one since it’s less available, but the Indian type is equally performing. You’ll be able to distinguish it by its color, which is darker than Brazilian rosewood and has less grain.

Generally speaking, rosewood back and sides are often used in acoustic guitars, for the most part. You won’t find rosewood predominant in the ukulele world, but it’s there. It’s just usually coupled with another softwood top because it’s very high in density. When that blend happens with a cedar or spruce top, the result is added mid-range and overtone that are superb!

If you’re interested in finger styling, cedar will unleash your full potential. What distinguishes cedar apart is its darker sounds that manage to strike the right mix between dark and controlled, but not as much as spruce.

In a nutshell, cedar is this middle ground between soft, warm, and darker tones, but it won’t provide you with optimal clarity and loudness if that’s what you’re seeking. While both are close to each other, you can identify cedar by its darker brown color that leans towards being reddish.

Cedar is also quite common in ukulele soundboards, mainly because it offers less pointed mids than spruce, which appeals to a larger number of ukulele players. Yet, at the same time, it offers more bass than spruce and manages to deliver complex overtones that players just love –– me being of them!

Since I’ve touched on spruce so much already, it makes sense for it to be next. Spruce is in a lane on its own with its highly crisp, resonant, and vibrant tone.

While the sound it produces is louder than any other tonewood, it still gives off surprisingly warm and full sounds that truly stand out. They’re not like the sound of the guitar’s tonal qualities that have this rough tone to them, far from that!

So, if you’re looking for a mix of strength in the mids and lows but warm sound, that’s the synonym for spruce. It sets a new definition for “well-balanced” tones. Not to mention, the sound of spruce is known to get even better by time since it’s among the types of wood that changes by the days.

And one last point, spruce is unique-looking too! It’s light-colored and will stand out in a crowd of wood types. You’ll also find it quite common in ukulele softwood tops, and it’s also often used with maple or mahogany to tone down its loud tones.

When ukuleles are mentioned, koa tends to be brought up too. I have to say that koa has the most enchanting look, in my opinion, featuring captivating wood grain patterns that give “heritage” vibes. Indeed, koa, also called acacia koa, is an exotic wood with Hawaiian origins, sharing the same history as the ukulele.

The most accurate description of the tone produced by a koa ukulele would be that it takes the very best of mahogany and the very best of rosewood and merges them together. The result is top-notch, high-end sounds incomparable to anything else. It’s a straightforward mellow sound with excellent sustain with either strumming or picking.

Acacia koa wood is among the woods used for the top of the ukulele, or the soundboard, in other words, to make sure its effects reach every inch of the ukulele. Understandably, koa is primarily used to make high-quality ukuleles and products for professionals, and koa ukuleles are quite expensive.

I consider maple to be a “complementary” wood type since it’s mostly used to balance out instruments with excessively rich sounds in the low end. That’s because maple tends to amplify the rather high frequencies of a ukulele and clarify them. Maple is a common wood used in the back and sides of a ukulele, and it’s often paired with a spruce top, in particular.

Since maple is all about clarity and resonance, ukes made of maple or having maple incorporated into them one way or another are the perfect choice for ukulele players who love recording their pieces and sharing them with friends online. Your recording will sound just as clear as the real thing!

Also, maple is a wood that’s employed for its gorgeous aesthetics, too. It comes in a wide variety of figures, like flamed, spalted, a tiger, a bird’s eye, or more. If you’re into artistic ukuleles, you’ll certainly admire what maple adds to your instrument.

Mango wood isn’t as common today as it once was, but it’s excellent wood either way! Originating in India, mango was among the common woods used for the ukulele.

It’s among the woods that are affordable to produce while at the same time, it boasts terrifically bright tonal qualities and physical ones as well. It’s tough and durable, delivering value for the money in every sense.

Today, mango is a common wood used for the construction of acoustic instruments, and like maple, it comes in a large variety of figures and variants as well. Also, you can still find numerous mango ukes on the market today.

Now that you’re well acquainted with the leading ukulele wood types and the differences between them, there’s just one more factor I want to bring your attention to. When you’re shopping for a ukulele, you’ll find that some ukuleles say “solid wood,” and others say “laminated wood” in their construction. Is there a difference? The answer is yes.

Solid wood ukuleles refer to ukuleles made of a single layer of wood. In terms of practicality, having one layer empowers the ukuleles to generate exceedingly vibrant and resonant sound. There are no barriers to how resonant the sound can be.

Their only downside of solid woods is that they’re on the expensive end of the price range, and they’re not very durable. They tend to be quite sensitive to the surroundings, like weather and environment, so you’ll have to be very careful with how you maintain solid wood instruments.

Laminate ukuleles refer to ukuleles consisting of several thin layers of wood merged together on the ukulele. Laminates are widely spread among entry-level ukuleles, and that makes sense. At this point, you’re still trying yourself out, and you certainly won’t go for the most expensive ukulele; it’s great to find a budget-friendly option that also offers decent quality!

While yes, laminates will in no way produce the same sounds of a solid wood ukulele, that doesn’t make them bad-sounding. It’s just a way to make affordable ukuleles a lot more available to encourage more ukulele players to practice. And at the same time, they’re actually pretty durable –– more so than solid wood ukuleles in many cases!

And by having laminates, you won’t worry that much about your uke, and they’re super portable. So, your uke will be your travel buddy on every trip you go to.

The Uke World Is Flexible!

Before I wrap up this article, I’d like to emphasize that the ukulele world is super flexible. You’re not bound by a specific wood that your uke has to incorporate to get a high-quality sound that resonates.

That’s among the many perks of playing the ukulele; there are no rules to the game; you play it your own way. Now that you know the different ukulele wood types, you just have to search and pick the kind that matches your playing styles and ukulele sound you’re most interested in and start strumming!

However, when it comes to choosing solid wood versus laminated wood ukuleles, always consider how and where you’re going to play the uke. If you travel often and tend to practice outdoors, you should go for laminate wood. Yet, if you need the best quality, tone, and resonance, solid wood is your go-to.

Finally, don’t forget to match the wood choice with the ukulele’s body size. Don’t forget that a soprano uke differs from a tenor ukulele, and both differ from a concert ukulele and each other as well.

After you’re settled, go ahead and get your hands on your killer ukulele and keep strumming!