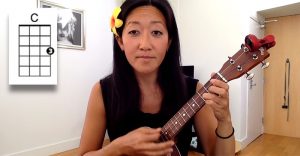 So, you own a soprano ukulele, and you might be wondering what songs you can learn on your instrument.

Short answer? You can learn just about anything you want on your uke, regardless of type! Long answer? The soprano ukulele is versatile enough that it can handle just about anything you throw at it, and even where it might not be up to the job, you can still come up with your unique arrangement to sidestep potential difficulties.

So, in this guide, we’ll look at the best songs you can learn on your soprano ukulele (most are beginner friendly!).

“Just The Way You Are” by Bruno Mars

The contrast between Mars’ sweeter, tender moments and gallivanting womanizer persona notwithstanding, here we have one of his quieter romantic tunes to savor.

“Just The Way You Are” is about the perfection within imperfection, especially as applied to romantic relationships. Don’t read too far into the lyrics, though, because it kind of starts to get shallow, creepy, and judgmental after a point.

Anyway, if you’ve ever aspired to pick up this piece of bubble gum pop history, all you’ve got to be able to do is play three chords.

“Let It Be” by The Beatles

People often say Beatles songs are “easy,” and while there is some truth to that, they are often brimming with underlying layers and complexities that make them easy to emulate and challenging to duplicate.

“Let It Be,” though, is one of those songs that sounds quite good even if all you’ve got is the core structure (chords) of the song nailed.

It might seem as though there are a lot of chords in this tune, but most of it can be played with just C, G, Am, and F. So, enjoy this Beatles classic.

Speaking of softer moments, we can’t forget James Blunt’s “You’re Beautiful.” Although we sort of want to forget a drenched and shirtless Blunt singing passionately at the camera.

It’s a bit of a mysterious song with its false intro “my life is brilliant.” We can only guess that Blunt himself was early to his cue, and it got left in the mix because it sounded good.

Song wise, it doesn’t get much easier than this. You can play along with just four chords!

“Somewhere Over The Rainbow” by Israel Kamakawiwo’ole

The late Israel “IZ” Kamakawiwo’ole is a legend among Hawaiian ukulele players, and his gorgeous rendition of “Somewhere Over The Rainbow” is considered definitive by some.

Turns out it’s not that hard to play, though. If you want to be able to sing it like IZ, that might be a whole other matter, but if you’re just looking to jam along or create your own version, no sweat.

This is an essential soprano ukulele song for all players!

“I’m Yours” by Jason Mraz

Jason Mraz’ laid-back island vibes generally make his songs perfect for adapting to the uke. Yes, Mraz himself plays guitar, but many of his songs are simplistic and relaxed, making them ideal for reinterpretation.

If you know anything about Mraz, you know that he often writes positive mantras into his songs, and the romantic sounding “I’m Yours” carries that torch too (check out these lyrics – “I’ll be giving my bestest / And nothing’s gonna stop me but divine intervention”).

What more is there to say? If you want “I’m Yours” to be yours, give it your best effort.

“Island In The Sun” by Weezer

Not all Weezer songs are ideally suited to the ukulele, but “Island In The Sun” fits like a glove thanks to its laid-back, island, vacation vibes.

Although it features five chords, most of the song was built on just four. And that fits the subject matter to a tee.

Don’t forget to bring up the dynamics in the chorus though, it just sounds better that way! A great song to play on the ukulele.

The late and great Leonard Cohen left us with countless masterpieces like “Suzanne,” “Sister of Mercy,” “Bird On The Wire,” “Last Year’s Man,” “Who by Fire,” and others.

His contribution to the music business can easily be summed up in “Hallelujah,” however, as it has inspired countless artists to reinterpret and make their own versions.

A strong vocal can help with creating your own version (it’s almost expected these days), but so far as songs go, this is not a hard one to pick up on the ol’ uke.

Throwback roots, folk, and bluegrass music made a serious comeback in the early 2010s (until bands started realizing there wasn’t anywhere they could take it).

Despite being a three-chord wonder, “Ho Hey” features a catchy and memorable chorus. Lyrically, it’s mostly a song about wanting to be with someone that doesn’t reciprocate your feelings and wishing their partner would bug off.

The self-congratulatory cheering and clapping at the end of the song is a bit much for my tastes, but if you’re a fan, I promise I won’t judge.

There is a near endless number of pop songs you can play using the I, IV, V, and vi chords, and “Hey Soul Sister” is just one among many (there are others on this list, too!).

It’s best to think of this is a sweet, romantic song about falling in love. Otherwise, like me, you’re bound to cringe hard at the lyrical content, which seems to be a little oblivious.

But so far as simple, recognizable, radio friendly songs are concerned, this is not a bad one to pick up. That’s part of the fun of learning new songs, anyway.

“I Will Wait” by Mumford And Sons

Here’s another folk and roots throwback (I sometimes refer to the entire genre as “stomp” but not affectionately), and some might even say this is the song that led the movement and brought it to the spotlight.

What’s most spectacular about this song is its dizzying tempo and frenzied banjo playing. Aside from that, you should not feel intimidated. The song is built on simple chords anyone can pick up. But if the speed causes you any trouble, just slow it down and keep building up until you feel comfortable with it.

For me, the vocals leave something to be desired, but again I won’t judge if you like the stomp.

Van Morrison’s “Brown Eyed Girl” is a true classic, and in its time, it was a bit controversial (because of the remark about going behind the stadium – that would be considered tame by today’s standards).

At its core, “Brown Eyed Girl” is a straightforward song. But the main guitar part isn’t just strumming the chords as it combines melodic lead lines with double stop runs and arpeggiation. Once you’ve figured out the strumming part, it might be worth giving that part a go too.

“End Of The Line” by Traveling Wilburys

Supergroup Traveling Wilburys might not be recognized by all. But the names Tom Petty, Bob Dylan, George Harrison, and Jeff Lynne should ring a bell (the late and great Roy Orbison was also once part of the group).

The Wilburys had a knack for writing and performing songs with simple structures. And true to form, “End Of The Line” is a three-chord wonder. That said, one should not approach it lightly. Each strum and riff are rhythm perfect. If you think it’s easy, try singing along while maintaining a steady metronome-perfect rhythm.

“Save Tonight” by Eagle-Eye Cherry

The 90s were a different time in music, and not a lot of people have faith that one day the music industry will go back to writing songs… Like real songs. Like they still did in the 90s.

And while I don’t have all the answers, what I can say is that we’ve still got great songs like Eagle-Eye Cherry’s “Save Tonight” to fall back on.

This is a four-chord wonder if there ever was one, especially since the same four chords repeat through the entire song. Lazy songwriting? Well, maybe. But the dynamics and layers of instruments tend to make up for it.

This is also a great song to play at a house party or at the side of a campfire (I know from experience).

Creedence Clearwater Revival (or affectionately CCR) came to represent the very sound of classic rock, with their most prolific period in the 60s.

Lead guitarist and vocalist John Fogerty wrote numerous songs like “Bad Moon Rising” whose essence was simplistic. With just three chords, virtually any player can follow along effortlessly with this song.

After learning this tune, it might be worth checking out other Creedence Clearwater songs, especially if you’re looking for more to sink your teeth into.

Another familiar four-chord wonder, “Run” by Collective Soul stands out as one of their top ballads (although “The World I Know” might be a little more prominent).

This is a simple, heartfelt song that mostly seems to be about the emptiness surrounding accomplishment.

If you struggle with the B, G#m, E, and F# chords, don’t worry – you can easily move this to another key (like C). Again, as with many songs on this list, it only uses the I, IV, V, and vi chords.

Evidently, there are no video ukulele tutorials for this song. That said, if you can play all the above songs, you shouldn’t have any trouble with this one. Think of it as a challenge and give it a go!

Don’t forget – as a soprano ukulele player, you can pick up just about any song you want! Same goes with baritone ukulele songs.

We’ve featured a lot of classics, pop songs, and three-chord wonders here, but you can take this as far as you want. Nothing’s stopping you from delving into a song like “Stairway to Heaven,” “Layla,” “Carry On Wayward Son” or otherwise.