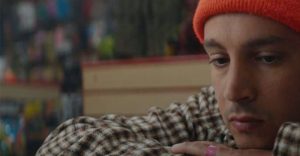 Tyler Robert Joseph is best known as the front man of Grammy Award winning (they were nominated for six and won one) musical duo Twenty One Pilots. Joseph was born in Columbus, Ohio on December 1, 1988.

Before the formation of Twenty One Pilots, Joseph recorded and self-released No Phun Intended. It was recorded in his basement during his senior year of high school. His solo work formed the foundation of the music of Twenty One Pilots, which takes influence from a variety of genres and artists mentioned throughout this guide.

Here we will profile Tyler Joseph the ukulele player, covering everything from the exact ukulele he plays, some of the best Twenty One Pilot songs (and covers) to play on the ukulele, Joseph’s early life, who Joseph is married to and more.

What Ukulele Does Tyler Play?

So what kind of ukulele does Tyler Joseph have? Well, Tyler’s ukulele of choice is the Kala Hawaiian Koa Tenor Cutaway or KA-KTGE-C model.

Kala Brand Music Co. is based out of California and is a well-known ukulele maker. In addition to ukuleles, Kala manufactures UBASS instruments, guitars, percussion, accessories, apparel, and parts.

How Old Is Tyler Joseph?

Tyler Joseph was born on the first of December 1988. At the time of writing this, on the 19th of August 2021, that makes Tyler Joseph 32 years old.

If you read this in future, you can use his date of birth to work out his current age.

What Are The Best Twenty One Pilots Songs To Play On Ukulele?

You can play just about any Twenty One Pilots song on the ukulele if you’re determined enough to come up with your own arrangement (especially for the “rapped” sections). Joseph himself has been seen playing many of his songs on the uke, whether live, at radio stations, or in various YouTube videos.

What follows are some of the more interesting picks you can find real footage for. Being able to watch Joseph plays these songs might prove helpful in case you want to watch and study his fingers to play along.

Here are several songs worth learning on the ukulele (mostly Twenty One Pilots tunes, but there are some covers here too).

Not a Twenty One Pilots original, “Can’t Help Falling In Love” was originally recorded by Elvis Presley in 1961 for his Blue Hawaii. The legendary song was written by Hugo Peretti, Luigi Creatore, and George David Weiss.

The Twenty One Pilots video version features the sound of a raw, lone ukulele accompanying Joseph’s voice. As the song builds, a piano and string section (mostly likely sequenced) enters, as his audience joins in on the chorus. It’s a unique arrangement, with a mix of raw and more produced parts.

“Stressed Out” is quite likely the song Twenty One Pilots is most known for, and Joseph himself can be seen performing it on a ukulele on some occasions.

The ukulele version makes it easier for you to make out the lyrics and meaning of the song. It also makes it clear that Joseph must be a bit of a Jason Mraz fan (because of the scat-singing mixed with a skillful falsetto).

This would be an excellent cover for anyone to add to their live ukulele repertoire.

“Tear In My Heart”

The original “Tear In My Heart” is an upbeat piano and drums song with distorted vocals. It’s almost like Coldplay on speed. As the song builds, it also gets a synth hook. Basically, upon first listen, it might not seem like the ideal choice for the uke.

Yet, Joseph himself has played a stripped-down version on his ukulele, and it’s quite a bit more dynamic and emotive than the original, because of the “whimpered” vocals in the chorus.

“Ride” is yet another popular Twenty One Pilots tune. This one features a bit of a syncopated rhythm, and is primarily driven by the drums, synth, and other keyboard sounds (like an organ). It is heavily influenced by reggae and hip-hop, making it kind of innovative, especially for pop.

Joseph’s ukulele version is more straightforward, with a steady, rolling strumming pattern. It’s a good example of how you can adapt songs with sophisticated arrangements to the ukulele.

As with “Ride,” “Lane Boy” by Tyler Joseph also wears its reggae influences on its sleeve. A distorted bass and frantic drumbeat are at the foundation of the track, with other keyboard sounds layered on top.

On the ukulele, Joseph leans more heavily on the syncopated minor-chord reggae strums. “Lane Boy” is a relatively easy song to adapt to the ukulele.

Even the Twenty One Pilots version of the song features ukulele in the intro, so “The Judge” is an obvious pick overall.

The main difference between the Pilots version and Joseph’s solo version, of course, is the layering of instruments. The ukulele version is far sparser.

Just be sure to nail the vocals (kind of a tall order for anyone!).

“We Don’t Believe What’s On TV”

The fast-paced, punk-rock oriented “We Don’t Believe What’s On TV” – believe it or not (see what we did there?) – has the ukulele at its heart. And yes, that includes the recorded version with distorted vocals and all.

When performing it acoustically, Joseph tends to slow it down so he can incorporate a few fills into his strumming pattern. This can be a challenging way of playing to master, but totally worth it if you can figure it out.

“Message Man” features a rather typical sounding Pilots chord progression. The recorded version is complete with distorted vocals, drums, and a syncopated organ (again pointing to their reggae influences). As the song builds, though, it starts to sound a little more like an Imagine Dragons or AWOLNATION track.

Joseph’s acoustic version is understandably more relaxed and vocal oriented. On the uke, Joseph holds down a syncopated strumming pattern to give it feel.

“Holding On To You”

Aside from the instrumentation, the rapped segments from “Holding On To You” sound like they could be straight from an Eminem song. Of course, they lead into a hooky chorus, complete with a unison synth and vocal part.

Since the music is chord driven (rather than being riff driven), it’s not a hard one to adapt to the ukulele. Add some dynamics to your playing to create some variation between the verse and chorus, and it should come out real nice.

Joseph once performed a unique medley featuring Capital Cities’ “Safe And Sound” and Daft Punk’s “Get Lucky” on Radio 3FM in Holland. Know it or not, the two songs blend quite nicely.

Although he is accompanied by backing vocalists (drummer Josh Dun and the band’s crew) in the video, the only instrumentation is his trusty uke. The strumming is relatively basic and should be easy for just about anyone to pick up and learn.

Tyler Joseph was the oldest of his three siblings, Zack Joseph, Jay Joseph (who is also a musician), and Madison Brett.

Tyler started playing basketball at an early age and even went on to play point guard for Worthington Christian, which placed second in the Division IV state tournament in 2008. Future Twenty One Pilots bassist Nick Thomas played on the same team as Tyler and even performed “The Star-Spangled Banner” with him at one of their games.

Tyler was presented with the opportunity to play basketball at Otterbein University on a scholarship. He rejected the offer after seeing a songwriter perform at a High Street Club. Tyler dug up an old keyboard that had been sitting in his closet and started learning the melodies he heard on the radio.

From about 2007 to 2008, Tyler would begin work on his solo album, No Phun Intended, which saw Nick Thomas playing guitar on several songs.

How Tall Is Tyler Joseph?

There are reports of varying heights, but five foot ten inches tall is the most common.

Who Is Tyler Joseph Married To?

Hailing from Ohio, Jenna has over 1.6 million Instagram followers and has appeared in multiple music videos. No doubt, she’s been the source of inspiration for many of Tyler’s songs.

Jenna was raised Christian and continues to practice the religion. She is the youngest of five siblings, with two sisters and two brothers.

Even if Twenty One Pilots isn’t exactly your thing, there is always something to be learned from other ukulele players. Tyler Joseph leans heavily on certain devices and chord progressions, so analyzing and picking up his style should be a fun project, and it shouldn’t take too long.

The coolest part about his ukulele playing is how he incorporates it into the pop-oriented music of Twenty One Pilots. It just so happens that he’s a great solo performer too, and that makes him worth checking out.