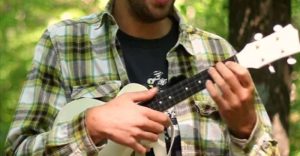 If you’re planning to go on a camping trip with some family or friends, there’s no better way to bring entertainment than with some campfire ukulele songs.

Below is an extensive list of the best campfire ukulele songs with summaries. That way, you’ll have a collection of choices to pull from for your trip.

First released in 1967, Brown Eyed Girl is a great campfire song because it sets that warm mood that goes perfectly with the warmth of a campfire.

It’s neither too fast nor too slow, and the steady pace combined with simple lyrics makes it an easy song for everyone to sing along to.

The song is also entry-level, making it a great choice to learn how to play the ukulele as a beginner.

Drift Away by Dobie Gray

Drift Away is a song that initially came out in 1973, and is about being free, which pairs very well with the feeling of freedom that comes with sitting around a campfire.

The song’s lyrics are catchy to the point where it’s impossible not to sing along, and the upbeat tune only adds to the catchiness factor. So, once you’ve gone through a song or two and gotten your audience into asking for more, Drift Away is a great song to bring out.

The Lion Sleeps Tonight by The Tokens

First released in 1961, The Lion Sleeps Tonight is a classic piece of music that everyone knows, so you won’t have any problems getting people to sing along to this one.

The song only has three chords, making it very easy to learn for new ukulele players, and it is also a flexible song that you can play around with if you’re feeling creative.

Whether you play it as your opening act, a bridge between two songs, or the closer, The Lion Sleeps Tonight is one song that should be on your campfire tracklist!

Let It Be by The Beatles

Let It Be was originally released in 1970 and is another household classic that everyone more or less knows, and for a good reason.

Like Drift Away, this song has similar themes of being free and appreciating both the big and small things in life, so it’s excellent for matching the upbeat nature of a campfire. While it is far from the most straightforward song to learn on a ukulele, it’s still somewhat beginner-friendly.

If you plan to learn Let It Be, be prepared to practice it for a little longer than some other songs on this list. However, it certainly is worth every bit of the practice that it requires.

First released in 1988, Don’t Worry Be Happy is a lovely, simple, and slow song that brings on a relaxed mood every time it’s played.

When sitting around a campfire, feeling relaxed is what everyone wants, which makes this song good to play somewhere in the middle of your tracklist. It’s a perfect one to play after upbeat music, and you can use it to reign your audience back in before you play another upbeat song.

Much like Let it Be, Don’t Worry Be Happy is a little more technically demanding, so you likely won’t pick it up as quickly as you would some of the other songs on this list. That said, the song is still a good choice for a beginner to learn before going on to something even more challenging.

Stand By Me by Ben E. King

Ben E. King’s Stand By Me was released in 1961 and carries an alleviating melody that you can’t go wrong with if you play it around a campfire. Combine that with themes of companionship and togetherness that come in the lyrics, and you get a song that’s practically made for campfires.

Stand By Me is another song that you can also play at pretty much any time without worrying about what song comes before or after it, and like many other songs on this list, it has a steady rhythm that is not complicated to learn.

Suppose you’re out camping during Christmas time. In that case, it’s only fitting to include a little Christmas spirit in your list of songs, and what better way to do that than with Have Yourself a Merry Little Christmas?

While every other song on this list is equally significant in its own way, everybody around your campfire will especially appreciate this song if it’s that particular time of the year.

Aside from a short section in the middle to the latter half of the song, it won’t take long to learn the consistent chords of Have Yourself a Merry Little Christmas!

Originally released on the Spongebob Squarepants album in 2009, the Campfire Song Song is a stark change of pace compared to the rest of the songs on this list, but it’s a good song if you want something with some high energy for your campfire audience. Especially if you’ve got young kids in attendance.

The song uses six chords that are not difficult to pick up, and if anything, getting the fast pace of the lyrics down might be your biggest challenge. The main reason for this is that this certainly is not the kind of song meant to be sung slowly if you want to get the full effect.

Lean On Me by Bill Withers

First released in 1972, Lean On Me is a lot like Ben E. King’s Stand By Me in terms of the central theme of both songs being people supporting one another in times of need.

However, unlike Stand By Me, Lean On Me has a very different melody that’s more high octane to the ear. It’s more upbeat and dramatic, which ultimately makes it significantly distinguishable from Stand By Me.

So, even though you might have reservations about playing both songs because of their similarities, they are more than different enough not to take away from one another. Although if you want to, you can play one early and one late in your tracklist.

Lean on Me also has a rhythm that is easy to get the hang of, making it another fantastic choice for those still relatively new to playing the ukulele!

Every campfire song on this list is reasonably simple. However, do not mistake simple for being negative, as their simplicity is part of what makes them such beloved pieces of music for many people.

While other great campfire songs did not receive a mention on this list, the ones we have covered are among the best for beginner and experienced ukulele players alike. So, get to learning those chords!