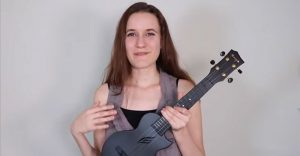 A medium sized ukulele (i.e., concert ukulele) is just versatile enough to be a great instrument for playing practically any song imaginable!

Of course, the problem with having unlimited options is that it can be had to know where to begin.

So, we made a list just for you. Here you will discover the best concert ukulele songs – many of which are popular, most of which are beginner friendly!

“Octopus’s Garden” by The Beatles

One of Ringo Starr’s (The Beatles drummer) most endearing and memorable moments is by far “Octopus’s Garden.”

It’s often been said that happy music is a rare thing. No surprise given that most artists write about tragedy, difficulties in relationship, depression, political and social issues, and so forth. Not to mention – happy songs can come across quite cheesy!

But this is one of those songs that continues to hold up over 50 years after its initial release! And my favorite part is undoubtedly the decidedly 60s R&B style guitar licks.

Nevertheless, it is a pop song at heart, which is easy to tell from the fact that it only uses four chords. Strumming along should prove easy!

The rock and roll tinged “Crocodile Rock” might seem beyond reach as a beginner, but once you get the hang of the rhythm, it’s not that bad at all. Certainly, a better fit for intermediate players than those just starting to find their way around the instrument, but it’s still a good challenge.

The chord changes aren’t as fast as you might think, as the video below demonstrates. And it’s a heck of a lot of fun to play!

Start simply with your strumming though. If all you can manage is two strums per bar at first, that’s fine. You can start adding rhythmic flare to your playing as you feel more comfortable with the song.

The Eagles are the quintessential country rock band of the 70s, with plenty of great works emerging later in their career, even after a 14-year absence (lead singer Glenn Frey is no longer with us, but technically, the band is still active today!).

“Peaceful Easy Feeling” is the perfect song to put on when you’re driving down country roads in a red truck, staring at the green fields, blue skies, and fluffy white clouds. And though it is indeed “peaceful and easy,” the lead guitar work is quite masterful.

As with most Eagles songs, this one has a simple foundation with layers of complexity on top. Strumming along should prove a simple task!

“Pumped Up Kicks” by Foster The People

Along came “Pumped Up Kicks” in 2010, and with its catchy chorus, it became a near instant radio hit.

At core, it’s a song about economic disparity and revenge (kind of sounds like a school shooting). And, perhaps, a commentary on that topic.

If you don’t think too deeply about it, though, of course it’s a fun pop song to play, and it’s not a hard one to pick up on the uke!

Standing at the top of the music industry artist pyramid is Taylor Swift, who hasn’t just done well as an artist, but also has a sizeable property portfolio.

“Love Story” is one of those songs that wants to make you believe in true love. You can play a lot of the song using just four chords, but it modulates later in its playtime. Which means it’s the same four chords except in a different key.

I would love to see someone adapt the main riff in the song to the uke, though. Are you up to the task?

“Good Riddance (Time Of Your Life)”. By Green Day

Green Day’s “Good Riddance (Time Of Your Life)” was often thought of as the perfect graduation song, especially in the 90s. But what most people focus on is the “time of your life” part, and completely forget the “good riddance” part, which is referring to singer Billie Joe Armstrong’s breakup.

This song is often found on beginner friendly lists, and though we agree that strumming along shouldn’t prove a challenge, if one were to adapt Armstrong’s exact strumming and picking pattern to the uke, that might be a whole other matter.

But it’s certainly a good song for the uke overall.

Experimental rock band Radiohead was probably at its height of brilliance with “Creep,” a song that will surely live on in alt-rock infamy.

Like Nirvana’s “Smells Like Teen Spirit,” “Creep” is a pop song at its core, though the lyrics and heavy guitars in the chorus might have convinced you otherwise upon its release. And it attracted an audience who resonated strongly with the “outsider” message.

With just four chords, all players should be able to pick up this one!

“The Judge” by Twenty One Pilots

The name Tyler Joseph is practically synonymous with the ukulele, and it just so happens that the Twenty One Pilots song “The Judge” features the uke quite heavily.

I’m not sure if I will ever get used to Joseph’s voice, but I’m not here to “judge” (I made a funny there).

Joking aside, this is popular indie pop song with a bit of a Jason Mraz tinge to it. For the most part, it’s not hard to play.

When it comes to “Viva La Vida,” some will certainly remember the image of singer Chris Martin hammering on the piano as the band performed it at an awards show… despite the song containing no build that would warrant that level of enthusiasm. I guess you must give Martin props for being the consummate performer.

The song is relatively repetitive and transferring it over to the ukulele should prove straightforward.

Beatle John Lennon was a legendary songwriter in his own right, and his talent is on full display with “Imagine.”

Lyrically, it’s a weird one, and is a product of the 60s bacchanalian era. There’s nothing wrong with idealism, of course, but the world Lennon is prompting us to imagine is anything but ordinary (stretch your imagination).

Do not be intimidated. Sure, there’s a long list of chords you see above. For the most part, the song can be played with three or four chords. It’s just that each chord has some variants.

“Love Of My Life” by Queen

Queen wasn’t afraid to take their music in a variety of directions. They will probably be best remembered for their rock opera epic “Bohemian Rhapsody,” but their considerable body of work demonstrates that they were just as versatile as Led Zeppelin if not more.

“Love Of My Life” is a contemplative ballad full of feeling. It has some underlying complexities, so learning it might take a little longer than some of the other songs on this list. That said, it really would be a shame to leave out chord changes, because they emphasize the lyrics nicely. So, take your time with this one. Get it under your fingers.

“All Along The Watchtower” by Bob Dylan

Jimi Hendrix’ version of “All Along The Watchtower” is largely considered the definitive version. But it would not exist without Bob Dylan’s original, which seems to be a tune meant to evoke a feeling instead of relaying a message.

What has become abundantly clear from its various iterations is that this is an emotive, three-chord song that has come to represent the mystery and legend of Hendrix.

You shouldn’t struggle with the strumming, but if you can, you should try jamming along to it with some lead licks too.

“I Won’t Back Down” by Tom Petty

Like many of his peers, be it The Beatles, Bob Dylan, Roy Orbison, Jeff Lynne, or otherwise (the song and music video featured some of these characters by the way), Petty knew the impact a simple song could have on an audience. He combined straightforward chord progressions with heart based, value centered lyrics, as is epitomized by “I Won’t Back Down.”

This song is a ton of fun to play with friends who can harmonize, because it’s really the harmonies that make it! Plus, anyone and everyone should be able to master these four chords.

The band that seems to replace guitarists as often as Spinal Tap replaces drummers is known for combining alt-rock with elements of funk, punk, and psychedelic rock.

The vibey “Otherside” features a memorable guitar hook that made it a big hit. If you focus on the chords, it’s a straightforward song, but part of the fun is learning the riffs too.

“Heart Of Gold” by Neil Young

Canadian singer-songwriter Neil Young is known for a variety of songs, like “Cinnamon Girl,” “Rockin’ in the Free World,” “Old Man,” and “Hey Hey, My My (Into the Black).” “Heart Of Gold” is certainly up there too though.

The above songs should keep you busy for a while. From simple to more complex, there are plenty of songs suited to the beginner, the intermediate, and beyond, especially if you start adapting riffs and licks to your instrument.

Once you’ve mastered these, though, don’t be afraid to branch out. As I mentioned at the beginning, you can pick up just about any song you want. It’s just a matter of committing to it and working out the details as you go.