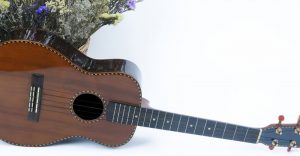 Playing the ukulele is a blast. It’s one of those special instruments that can make you instantly happy.

The baritone ukulele is really no exception. It might be tuned a little differently than a soprano, concert, or tenor ukulele, but fundamentally it’s still a mini guitar with a smaller, high-pitched range.

Tuning Up Your Baritone Ukulele

We’ve covered the basics of tuning your uke in another guide, so we won’t be going into extensive detail here.

But it is important to know that while soprano, concert, and tenor ukes are tuned G – C – E – A, the tenor uke is tuned D – G – B – E. That means baritone ukes are slightly lower pitched overall.

The fastest and easiest way to tune up your baritone uke is with an electronic tuner. When your tuner is on and you play a note, it should let you know how close you are (sharp or flat) to pitch.

Keep playing the string as you’re tuning it, as otherwise your tuner will lose track of where you’re at.

Keep adjusting until you see the needle on your tuner move to the center (it’s usually obvious when this happens). Do this for each string, and you will be off to the races.

The Four Strings Of Your Ukulele

As noted, your strings should be tuned D – G – B – E from thickest to thinnest.

This is important to remember whenever you’re trying to figure out ukulele tabs, chord diagrams, fretboard diagrams, or otherwise.

Not a complicated thing, but an important one.

You have a left hand and a right hand. Obvious, right?

For most players, their left hand will be their fretting hand, and their right hand their strumming / picking hand. It will be the opposite if you’re left-handed or simply want to play left-handed.

You have two hands, and each one plays a different role. Divvying up the responsibilities can take some of the mystery out of learning to play the instrument.

You will be using your fretting hand and fingers to fret specific notes and chords. There tends to be a lot more movement with this hand, or more accurately, changes in position.

Your picking / strumming hand can be just as busy, if not more so, as fretted notes need to be constantly picked and strummed. But this hand tends to stay in one place. Rarely is there a need to shift positions. Meanwhile, you will need to shift your fretting hand to different positions depending on the exercise, riff, or song.

For beginners, I always like to point out that you’re going to be training your fretting hand to do things it has never done before, including holding weird fingerings (chords). So, take your time and don’t get frustrated with the process. It can take a while for muscle memory to kick in.

Fretting technique is kind of a nuanced thing.

But for starters, it’s good to know that you won’t generally be using your thumb (though some players do).

The thumb doesn’t play much of a role, except to allow for free movement and stretching of other fingers. Positioning your thumb at the back of the neck (not the fretboard) slightly above center is a good place to start. No need to apply any pressure as if you were holding an object.

Your index, middle, ring, and pinky fingers all have a role to play. Though a lot of players tend to use their pinky a little less, it’s still a good idea to train it, as you might use it for the occasional stretch lick, or chord hammer-on.

When fretting any note, with any finger, you’ll want to place the finger close to the fret (it should be hugging the fret) but not above it. You also need to close the gap between the string and the fretboard if you don’t want it to turn into a muted, buzzing, or dead note. That means applying some pressure to the string.

But understand the direction of the pressure being applied. You want to apply it towards the fretboard. That means towards your body, as the back of your fretting hand (not front) should be facing you.

To confirm whether you’re holding the note correctly, pluck the string with your picking hand. If the note does not come out clearly, or if you hear buzzing, your fretting technique needs some work. Chances are your finger positioning is a little off, you’re not applying enough pressure, or both.

The idea is the same with chords. The main difference is that you need to fret multiple strings, sometimes at different frets, simultaneously.

When fretting individual notes, we pay more attention to finger positioning. With chords, we give ourselves a little more grace. Depending on the shape, it’s hard if not impossible to get your fingers hugging the frets. So, we settle for the closest to the frets we can possibly be.

This can all be a little nebulous before you’ve played your first chord, so if you don’t get it yet, don’t worry. We’ll be looking at playing chords in more detail later.

Your picking or strumming hand is the “percussive” half of the equation. You’re going to be picking and plucking notes, sometimes strumming, sometimes moving fluidly between techniques.

Your picking / strumming hand is also responsible for holding down the rhythm. Sometimes you’ll be picking or strumming fast, sometimes slow. And there’s plenty in between.

Generally, picking is done using your thumb (p), index (i), middle (m), and ring (a) fingers. The p – i – m – a notation comes from the Spanish names for your fingers and is a common way to notate finger usage in ukulele music and tabs.

For the most part, the pinky isn’t used. Depending on the phrase, you might only use thumb and index, or just thumb, index, and middle.

Either way, thankfully, fingerpicking is relatively easy. Use your thumb (downwards motion) to pick notes on the fourth string. Use your index for the third, middle for the second, ring for the first (all in an upwards motion).

Also refer to the video below:

It’s fair to say there are different strumming techniques for the ukulele.

Many beginners start with their thumb. If you do, it’s best to advance to using your index finger sooner rather than later. Strumming with your index is really the bread and butter of ukulele strumming.

If you get to the point where you’re more advanced, you can strum using all your fingers.

This video explains how all this works in detail:

It’s at this point that your learning can branch off in a variety of directions. But I’d like to set forth the notion that learning your first scale is one of the most valuable things you can do at this point. Not only can it act as a finger exercise, but it can also help you work on left- and right-hand coordination. And as you’ve already learned, that plays a big role in playing the uke.

The C major scale is the perfect place to start, since it’s the first scale most piano players learn (it represents just the white keys with no black keys).

This scale is known as a diatonic scale, as it has seven notes in it.

Usually, these notes are played in order, which is certainly possible on the ukulele too. But the ukulele is two strings short of the guitar, so it’s generally a better use of our time if we learn to play the scale on all the strings, even if the note you start and end on isn’t C (though you will see that the notes are still in order).

Although it would be great practice to learn the scale in every position, here we will only be looking at how to play it in the open position.

On the third string, play the open string, and then the second fret.

On the second string, play the open string, first fret, and third fret.

Then, you want to play the entire thing backwards too.

Now, it’s completely understandable that once you’ve successfully played through this exercise once, you’re going to feel inclined to move onto the next thing.

But here’s something crucial for every beginner to understand. The only way to master anything on your instrument is with repetition. If you want to get better at anything, slow, intentional repetition (using proper technique) is your best friend.

So, spend plenty of time practicing the above. How many times? It’s hard to put a number on it but try 25 times. And if you’ve got it under your fingers (muscle memory) after that, you have my permission to move on. If not, try 100 times. It might seem excessive, but it’s worth developing this level of discipline early.

How To Read Ukulele Tab

We’re only going to be covering the absolute basics here, but it should be enough to read an exercise like the above.

By now, you know that the ukulele has four strings. And we’ve already numbered them earlier. 1 is the thinnest, 4 is the thickest. So, in tab, the four horizontal lines represent your strings.

The numbers on the horizontal lines, of course, represent frets. 0 would be an open string. 1 is first fret, 2 is second fret, 3 is third fret, and so on.

The only other thing you need to know is to read tab from left to right. So, in the above example, 0 on the fourth string – in other words, the open D string – is the first note you play. Then, you would play each note following in order / sequence.

Learning To Play Chords On Your Ukulele

If you’ve made it to this point, then know it or not, you’ve already learned one to two professional lessons worth of material.

The next logical thing to work on is open chords.

The great thing about learning your chords on the baritone ukulele is that the same shapes also translate over to guitar.

At this point, the most critical chords to learn are A, C, D, E, and G major, as well as A, D, and E minor. These are the eight chords most ukulele and guitar players start out on. You can practice other chord shapes, of course, especially if you have a chord chart to work off. But most other chords will prove more challenging than these.

Now let’s walk through each chord:

Learning each chord is just the beginning. You also need to be able to transition between each chord smoothly. And by practicing diligently and consistently (with repetition), you will come to the point where switching between just about any chord is completely comfortable!

How To Learn Baritone Ukulele As A Beginner, Final Thoughts

More than anything else, learning baritone ukulele as a beginner is about getting all the little details straight! Once you figure out the basic mechanics of playing notes, scales, and chords, a whole new world starts to open.

It’s okay if some parts present a bit of a problem. That’s quite normal. You might need to review the material above, or even have someone show it to you. But if you persist, guaranteed, you will eventually figure it all out.

We hope you found this guide helpful and wish you all the best on your ukulele journey.