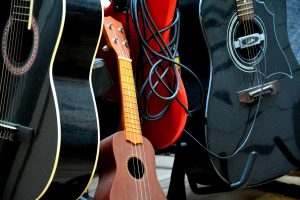 You know how they say, “Share our similarities, celebrate our differences “? This is what comes to my mind whenever I think about how guitars and ukuleles are so much alike yet so distinct. Each has its own taste, yet they smell the same!

If anything, each of these two has a spell on me, and I am pretty sure you can find a lot of musicians who enjoy them each at a time because each of them would uniquely and irreplaceably decorate your song.

At first glance, you can tell these two instruments meet on more than one common ground, from the same fret system to the same mechanism they produce sound, it may seem like they can’t possibly be THAT different, but this is not necessarily true.

So let’s browse a little deeper through the ways these two instruments differ from each other.

Believe it or not, these two instruments didn’t appear around the same time and didn’t have a common origin!

The origin of the guitar goes back over 4000 years ago, and even though the guitar has no clear background whatsoever, it is believed that it first appeared in Spain, and the word “guitar” was derived from the Spanish word “quitarra.”

On the other hand, ukuleles originated in Hawaii. Nevertheless, some say that they were brought to Hawaii by Portuguese immigrants.

It is crystal clear most ukuleles are much smaller than guitars, and thus the frets of the ukulele are much closer to each other.

This makes playing the ukulele much easier because it requires less stretching; it’s lighter and is easier to carry around, so taking a cab, or traveling in an airplane won’t be much of a hassle.

This difference in size is one of the main reasons why they don’t sound the same.

From the number of strings to the material it’s made of, it’s all distinguishable.

Most guitars have six strings, which are mostly made of steel; they need high tension and sound louder than those of the ukulele.

On the opposite side, ukuleles have four strings, which are mostly made of nylon, and thus they happen to be much more flexible and don’t require much tension. The strings of the ukulele give a warmer tone compared to that of the guitar.

The extra strings on the guitar give space for more chords and scales, while the soft and delicate sound of the ukulele is very capturing.

It might not come as a surprise that guitars and ukuleles are tuned too differently.

Notice how similar baritone ukuleles sound to guitars in standard tuning? The strings are tuned to give the sound of the upper four strings of the guitar!

Because of the way baritones are tuned, in addition to their size, it’s hard to distinguish their sound from that of the guitar, to most guitarists who try them, the experience isn’t exactly what they would call “new” and they’re not really impressed.

Another difference is that the strings of the guitar are arranged from low to high, which is not true when it comes to ukuleles.

This is particularly a reason why it can be a little confusing for guitarists to try to play ukuleles at first; however, it won’t be long before they get the hang of it.

Tip: In standard tuning, if you have your capo on the fifth fret and you only play on the top four strings, you are technically playing the ukulele.

When it comes to riffs, no one can deny that guitars have the upper hand; this is because a guitar has more strings, and the range of tones you can get out of it is more than that of a uke.

But this is not the same case when it comes to chords.

Ukuleles do a much better job with chords because you can find chords that require using only one finger, and like mentioned above, the distances between the frets are smaller, so you don’t really need to stretch your fingers much.

It’s perfect for beginners, and even though the chords look different when played on each instrument, they sound too close.

This is a major difference for anyone willing to master both instruments.

For starters, strumming ukes is much easier and doesn’t require much precision. If you are a beginner, it won’t take you that long to get it right, on the contrary, learning to strum a guitar takes a while because you need to develop some skills.

Strumming sounds different from both instruments because of the fact guitars have more strings, not to mention how different the resonance of sound is in a bigger instrument. This ultimately makes strumming sound brighter and louder in guitars.

If you just started playing any of these instruments before trying to play the other, then you should be focusing on getting it right. You will be experiencing the strings for the first time, and you haven’t developed a style yet, but going from guitar fingerpicking to ukulele fingerpicking or the opposite is a bit challenging.

It’s no brainer that a plastic pick would produce a different sound when hitting nylon than that when hitting steel strings; however, the style of picking differs as well.

The rule is, ukuleles cost much less compared to guitars. An average beginner guitar can cost about three times the price of a good quality ukulele, so if you are on a budget and not sure which of these to try first, then this should make it an easy choice.

Which Is More Suitable For Beginners?

I am a big believer in “Different strokes for different folks.” People don’t share the same likes, and that’s okay.

There is no wrong or right when it comes to this despite the fact that a vast majority would recommend getting a ukulele first because of its small size and lightweight, in addition to its flexible strings and simpler tones, it stands out for a start. You will be able to comprehend all the basics, and it will teach you how the fretboard works at the same time, it’s not too complicated, so it’s never really frustrating.