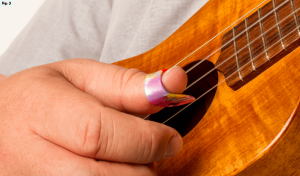 Perhaps you’ve heard the phrase ‘music is universal’ more than once in different contexts, and it’s admittedly a universal fact, not only because music speaks to one’s soul, but also because it undergoes constant transition and adaptation.

‘Transition’ and ‘adaptation’ are two important words when discussing the history of the ukulele.

The ukulele first originated as an alternative for different small guitar-like instruments that were introduced to the Hawaiian islands when Portuguese immigrants visited the islands, and that’s what we mean by transition and adaptation: ukuleles were initially made even smaller than guitars, and no picks were used to play, because the idea was to come up with a new instrument that can be easily and carefreely played on the beach by night, for instance.

Ukuleles are generally preferred for their agile and dainty sound, and that begs the question: is it preferable to use the plectrum or the pick to produce that sound? Or is it better to stick to the rule that states no pick is the best bit?

In this article, we will help you answer that question for yourself.

Generally speaking, you don’t need to use a pick, but if the piece you’re playing sounds better using the pick, then, by all means, go for one!

If you are a beginner who’s not well-informed on playing the ukulele, here are some arguments that are usually presented to dissuade people from using the picks. We will introduce each argument and then respond to it.

It is believed that using a pick is too harsh on the ukulele, and it will result in some wear and tear that vary in degree, affecting both the strings and the top of the uke.

Counter-argument: It’s true that using thick picks might indeed result in such damage, but ukuleles shall never be treated like museum pieces, and they will eventually wear out, whether you’re using the picks or your fingernails; it’s only a matter of time, and at some point, you’ll need to change the picks or give your ukulele a makeover.

It is also claimed that using picks produces a rather harsh sound, making the uke sound more like a guitar.

Counter-argument: While that bears truth to it, it shall not be regarded as a disadvantage. What if you want it to sound like a guitar? In fact, using the picks, in most cases, produces a higher sound, making it the perfect bit if you’re playing with a band or in a large area.

Some might argue that using the pick poses some limitations on your strumming techniques, and there is no denying that a pick restricts your movement somehow.

Counter-argument: While you cannot shift the techniques easily with a pick pinched between your fingers, with practice, you can perfectly harmonize your moves on the strings.

As clarified above, using the ukulele is not a necessity; it’s merely a preference. However, that doesn’t mean they don’t have some advantages.

If you have played the guitar first, surely you’re more accustomed to using the pick, which makes the transfer from a pick to no-pick style no easy decision. If this is your case, you should probably use the pick for a couple of weeks to get accustomed to the new instrument, then if you’d like to drop the pick, try practicing with your bare hands, even if it seems alien to you at first.

2. Preferable for People with Delicate Joints or Fingernails

It is also preferable to use a pick if your joints are weak, making strumming a bit of a tiresome exercise. Additionally, picks are the ultimate choice for children as they have delicate fingers, and they are also preferable for people who have brittle splitting nails.

If you want your uke to produce a higher and a greater in volume sound, then you should definitely use a pick. Using the picks with the ukes projects the music at a higher volume, and hence ensures it broadly spreads. Picks assist in bringing out the ‘highest’ of the ukulele.

How to Choose the Right Pick for You

There are some factors to consider before deciding on a specific pick, or even no pick.

Firstly, you should determine whether you will be playing different music styles. Different styles and music genres are played on the uke nowadays, including pop and rock songs, and these require using different picks. If that’s what you’re after, choose a pick to give a high volume to your songs.

Secondly, picks come in different shapes and sizes, and the basis for your choice should be the size and the model of the ukulele itself. To elaborate, a thin pick will work great if you’re just after playing rhythms, while a medium pick is preferable if you’re aiming at something more advanced, and thick picks are what you should opt for if you’re using a Baritone uke because these are generally bigger.

Thirdly, you should also consider the material for your pick. The widely used picks are felt picks, plastic picks, and rubber picks. The softer the pick, the softer, and mellower is the sound it brings out. Ultimately, what should determine your choice is your personal preference. Some complain that the plastic feels weird between their fingers, and others argue that rubber is a bit hard to have a tight grip on, for example.

To conclude this section, you should pick the pick that suits you just fine and feels best for you. The upside is that picks are usually cheap; you can try a variety of them until you find the perfect pick.

Determining whether you need a pick or not is ultimately your call. The best advice will be to try playing the uke both with and without a pick to see which feels more comfortable and produces the desired sound. You might also want to try both finger-picks and thumb-picks for more options. And keep in mind that while some ukulele legends like Jake Shimabukuro don’t at all use picks, others like Led Kaapana use them! Totally your call.