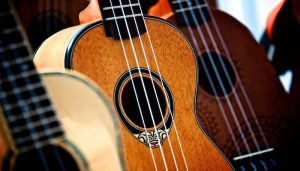 Throughout the years, the ukulele has become an article of interest for many performers around the world, which increased the widespread use of this traditional, originally Hawaiian instrument.

Whether you’re a ukulele player or just interested in the increasingly popular instrument, you’d want to know who excelled in performing with it.

Here are some of the most famous ukulelists with a brief introduction to each of them.

When the music video “While My Guitar Gently Weeps” spread like wildfire in 2006, Jake Shimabukuro became an instant ukulele legend all over the world.

He’s known to be one of the fastest ukulele players at the moment. With his unique style and fast fingerwork, he became a phenomenon that is compared to huge names like Miles Davis.

Shimabukuro was born in 1976 in Hawaii. Besides being a genius ukulelist, he is an outstanding composer who wrote many songs for different movies like the Japanese “Hula Girl” and “Sideway” movies.

Furthermore, he plays the tenor uke, and his style combines many genres. He has written jazz, rock, classical, folk, blues and many other sorts of music.

Not only did he introduce many solo albums during the past years like “Sunday Morning” and “Walking Down Rainhill, ” he also released educational DVDs for ukulele players called “Play Ukulele Loud.”

It was surprising that the winner of season eleven of “America’s Got Talent” in 2016 was a twelve-year-old girl who plays the ukulele as her first instrument.

The young talent, Grace Vanderwaal, has captured the hearts of people around the world with her last performance on the show with the song “Clay” that she originally wrote. Since then, Grace has been known as a singer, songwriter, and ukulelist.

Also, she released her first album “Just The Beginning” in November 2017.

Herbert Butros Khaury, mostly known as Tiny Tim, is a singer and uke player who was born in 1932. His love for music made him drop out of school to learn guitar and uke.

Although his parents didn’t acknowledge his passion, he debuted in the 1960s and amazed the world with his falsetto tone. Tiny Tim’s hit “Tiptoe Through The Tulips With Me” came to light in 1932 and is still recognized until now.

Unfortunately, he was diagnosed with coronary artery disease after his first heart attack at a uke festival in 1996, but this didn’t keep him from continuing his tours.

Later this year, he passed away after suffering from another heart attack following his performance on stage in Minneapolis.

George Formby was an outstanding British singer and songwriter during world war II. He traveled the world during this time with his wife and played lots of improvised songs on the ukulele to fit the situation.

One of his hits at the time was the song “When I’m Cleaning Windows”. Moreover, he used to perform with a traditional uke or a banjolele.

It’s worth mentioning that Frank Skimmer is also an enthusiastic banjolele player who played the uke in a song called “Ukulele Central” by Fairport Convention.

The American musician and composer, Daniel Ho, was born in 1968. At an early age, a friend introduced him to the ukulele. Then he was hooked on it immediately. He learned one verse on that day, and that was enough for him to decide that he would be a professional.

Now, with eighteen solo albums, six Grammy Awards, and eleven nominations, Daniel Ho is known as one of the most talented and innovative musicians of his age.

Who doesn’t know the famous Beatles members! In fact, not only did John Lennon and Paul McCartney excel as vocalists and talented guitarists, but they also mastered the ukulele and performed solely with it on many occasions.

A notably touching one was when Paul McCartney performed the song “Something” on the uke, in the memory of his friend and band co-member George Harrison.

Born in 1976, Amanda Palmer was a remarkable American singer and songwriter. She created the Dresden dolls group together with the drummer Bian Viglione in 2000. The group adopted a dark rock style, which Amanda herself described as “Brechtian punk cabaret.”

Amanda Palmer began her ukulele career by playing the uke in many concerts. However, in 2010, she recorded a full solo EP (extended play record) playing the ukulele.

The EP was named “Amanda Palmer Performs The Popular Hits of Radiohead on Her Magical Ukulele.”

Ukulele artist Cliff Edwards, famously known as Ukulele Ike, acquired this nickname from the club owner, whom he was working for because he consistently couldn’t remember his name.

Yet the whole world knew his name as the performer who had the upper hand in making the ukulele as prevalent as it is now. Hence, he is considered the godfather of the uke.

At a young age, he taught himself to play the soprano uke because it was the cheapest instrument in the shop. Later, he used to play the tenor in his performances.

His music was fabulous and inspired lots of people to learn the ukulele, which in turn increased the uke’s sales and resulted in the addition of the uke’s chords to standard musical sheets.

Moreover, he made an appearance in many movies and played the uke at the beginning of the movie “Laughing Sinners”.

The Canadian James Hill is a gifted ukuleleist who is viewed as one of the best soloists currently. He performed worldwide with several kinds of ukuleles like tenor, baritone, and resonator ukuleles.

Apart from touring the world with his uke, James Hill took it as a mission to teach new players the ukulele through his online series “Ukulele in The Classroom.”

Surprisingly, the first man to land a foot on the moon was a ukulele player. After Apollo 11’s safe trip to the Earth, Nasa has published photos of Niel Armstrong and his crew members in a quarantine where Armstrong was actually strumming on a uke.

Lately, the ukulele has become more and more popular. Many actors like Adam Sandler and Ryan Gosling have learned to play the uke either for a particular role or as a hobby.

In fact, there are a lot of ukulele players who have outdone themselves and wrote a part of the ukulele history throughout the centuries.