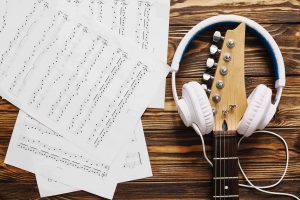 Music sheets are simply a bunch of tones and rhythms put together in several different ways to create different songs. Now, when you put it this way, it may sound easy, but the truth is, music-reading requires immense coordination between your hands and your eyes to be able to translate music symbols into actual music.

To be able to reach this point of coordination, you need to fully understand what’s lying beyond your eyes in the sheet first. Then, with enough practice and determination, you’ll get the hang of it and play like a pro.

Ukulele music is written in different ways. One way is to write it in the form of a standard notation like any other instrument’s music sheet.

A much more straightforward method is to write it in ukulele tablatures. A tab is a distinct sheet form designed specifically for fretted instruments, that’s why ukulele tabs can only be applied to the ukulele. Also, chords have specific diagrams to explain them.

In this article, we’re going to discuss how to read chord diagrams, ukulele tablatures, and standard notations.

Many teachers choose to explain the chords first to keep the learning process exciting and hook you up with the uke as you’ll be able to produce some music before learning how to read standard notes.

A chord diagram is composed of:

The base of a chord diagram is made of a grid that consists of four vertical lines intersecting with five horizontal ones. It looks this way to simulate the shape of the fretboard when you’re holding the uke upright with its neck upstanding.

The horizontal lines represent five of the ukulele frets. Whereas, the vertical lines represent the uke’s strings from left to right where the line in the far left is the G string, and the one on the opposite side is the A string. For a better guide, sometimes you’ll find the letter corresponding to each string written below each line in the diagram.

Furthermore, you’ll find the chord’s name written on the top of the diagram.

The dots are the symbols that tell you where to put your fingers on the fretboard.

For example, if you find a dot placed on the second vertical line from the left and between the second and third horizontal lines, you should play the C string at the second fret.

These numbers tell you which finger of your left hand you’re supposed to use for this specific string while you’re playing this chord. You’ll find numbers from one to four.

Moreover, numbers are either placed on the dot or below the grid on the same line with the dot.

Each number corresponds to a specific finger:

Ukulele tabs have the advantage of being descriptive when it comes to indicating which strings are played on, besides being for chords and regular notes altogether.

At the same time, they lack rhythm. Meaning that you can’t play a song you haven’t heard before on the uke because they don’t show you the timing of each note. Therefore you must memorize the song before you play it.

A ukulele tab consists of:

A ukulele tab’s base is four horizontal dashed lines where each one represents one of the uke’s strings. They go in the order GCEA from bottom to top.

Keep in mind that when you hold the uke properly, the strings are arranged in the opposite direction, which means that the bottom string on the uke corresponds to the top line on the tab and vice versa.

Also, mostly you’ll find the tabs written for ukuleles with GCEA tuning. If the tab is for another adjustment, it will indicate that. Then you should set your tab in accordance.

Frets are shown on tabs by numbers. Let’s say there’s a number “3” on the third line from the top, and this means you should play the third fret on the C string.

If you find a number 0 on a fret, then you should play an open string, which means no pushing on any of the frets while playing this string.

Furthermore, tabs are read from left to right, so you should begin with the frets shown on the left of the strings then continue to the right side. If it happens that two numbers are placed above each, you should play them simultaneously.

Chords are expressed by more than one number above 0 on each line (string) on the same row.

That means you should play all these frets at the same time.

Barlines aren’t of great significance in ukulele tabs due to the absence of timing. They’re just used to separate the song parts.

The letter “h” between two frets on the string indicates a hammer-on.

For example, if you encounter the note “4h7” on string G, you should push a finger on the fourth fret of string G while pulling the string. Then push another finger on the seventh while withdrawing the first one from the fourth. This way, you get a higher secondary pitch.

Notations are the universal language of music. If you’re planning on becoming a professional ukulele player, you should learn and understand them.

Seeing that a ukulele has many possibilities for playing the same note, the only disadvantage in this type of music sheets is that, contrary to tablatures, they don’t show you which string you’re supposed to play a note on.

A standard notation consists of:

First of all, the base of a notation is composed of 5 horizontal lines going along the whole page. Unlike the tabs, they don’t represent the strings of the uke, but they determine the value of the note they hold.

Since standard notations are read from left to right, the first thing you’d see on the left end of the staff is the clef. It is the symbol that indicates the pitch of the note, whether it’s high or bassy. Thus when you change a clef, you switch what all the lines indicate.

There are many clefs, but the most common ones are the treble clef (G clef) and the bass clef (F clef). When they exist together, they’re called grand clef.

Usually, a traditional uke has high pitched notes. Accordingly, its music is written with a treble clef except if you’re playing a bass uke or changed the tuning of the uke to a lower G.

The following thing you see on the staff after the clef is the time signature. It’s written as a fraction with the top number expressing how many notes there are in each measure and the bottom number showing how they are counted.

For example, the most common time signature is 4/4 time. It implies that there will be four beats in each measure and a quarter note to be counted. Also, sometimes you’ll find this time signature written as a capital “C,” which stands for “common time.”

Another example is 2/4 time. It states that there will be two beats in a measure and a quarter note to be counted.

A measure is a space on the staff that contains a specific number of beats, and a bar line is what separates the measures from each other. All measures in one staff must hold an equivalent amount of beats.

A note carries the indication of value and duration. The value is determined by the position of the note on the staff, whether it’s on a line or in a space.

For example, using a treble clef, the lines indicate the notes FDBGE from the top down, while the notes ECAF are the spaces between the lines.

Moreover, sometimes you’ll find extra lines above or below the main five. They are called “ledger lines,” and they hold additional notes to reach a higher or more bassy pitch.

Like the tablatures, notes placed above each other are played together.

The duration of a note is understood by its symbol:

Furthermore, in some cases, you’ll encounter a dotted note, which is any kind of the notes mentioned above with a dot to its right. This note is counted by increasing the duration of the note by half. For instance, a whole dotted note should be counted as six beats instead of four.

Like the notes, rests are signs that indicate a number of beats, but the difference is that they are unplayable. When you see a rest sign, you should pull your finger away from the string and count the time of the rest, then play the next note.

These are three signs that demonstrate a modification in the note.

A sharp sign “#” on the right of a note means you should raise this note by a half, which is equivalent to one fret on the uke. On the contrary, if you see a flat sign “b,” you should lower the note by a half.

A natural sign “♮” erases the modification introduced to the note by a sharp or a flat, hence returns it to its original form.

There are twelve key signatures in the whole music theory, which are composed of different combinations of sharps and flats. Each scale has a related key signature to express the raised and lowered notes throughout the music piece.

In other words, it helps you know which notes are going to be sharpened or flattened from the beginning until the end of the notation without repeating the signs every time the note appears.

Also, bear in mind that key signatures apply to the whole note while accidentals apply to the note written beside it solely. For example, F natural is an accidental if it’s played in A major key, meaning that the note F was already sharpened in the key signature. Still, by putting a natural sign beside it, it returns to its original form.

Finally, learning musical signs is pretty easy. Hence, it won’t take you much time to understand them and put them in use.

However, the problem is that many people start learning music and quit half the way. Perhaps that’s because they ignore the fact that the most important thing when it comes to mastering an instrument is to practice.

By practicing, you start interpreting the notes and rhythms way faster, and you’ll advance to harder sheets step by step till you become a pro.