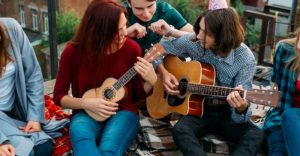 Ukulele Is Easier than Guitar

These smaller instruments are perfect for beginners because they come in several sizes, unlike guitars. You can choose from a soprano, tenor, concerto, or baritone. Most people go with whichever is the most comfortable for them to play.

The more comfortable you are holding and playing the ukulele, the easier it will be for you to learn how to play.

Why Is Ukulele Easier than Guitar for Beginners?

You’re probably wondering what makes learning a ukulele easier than a guitar for a beginner. It’s just a tiny guitar, right?

While ukuleles look very similar to guitars, only smaller, they have some essential differences that make learning how to play significantly more manageable, for most people, than the other instrument.

It Has Fewer Strings than a Guitar

One of the most challenging parts of learning a string instrument is getting a handle on the strings. You need to press multiple at a time to create the chord you want, which can be tricky for beginners.

Since traditional ukuleles have fewer strings than a guitar, it makes getting used to the string that much easier.

Most ukuleles have only four strings, while the standard guitar has six. While this may not seem like a huge difference, when you’re just starting out, you’ll notice it does make a difference.

Something to keep in mind is that while most ukuleles have only four strings, there are some that have six or eight. If you’re looking for a ukulele that’s beginner-friendly, you’ll want to stick with one that only has four strings.

It Has Softer Strings

If you’ve ever picked up a guitar before and tried to play, you may notice that your fingertips are sore or even in pain after trying. Even though the ukulele and guitar are both string instruments, their strings aren’t made with the same material.

Most guitars use strings made with a combination of copper, zinc, or bronze. While this produces a lovely sound, it can be harsh on your fingers. People who make ukulele strings often create them with nylon, which is much more gentle on your fingers.

Not only is it softer on your finger, but it also provides a softer sound. Some ukuleles have fluorocarbon strings which, while gentle like nylon, are much more expensive.

Ukuleles tend to have softer strings than a guitar. This makes learning more accessible and more comfortable for the musician.

As you continue to practice and improve, the strings on a guitar won’t bother your fingers as much, but in the beginning, the softer strings of a ukulele can prevent frustration.

It Has a Thinner Neck than a Guitar

If you’ve looked into learning how to play a ukulele or guitar, you know that each instrument has frets on its neck.

These frets help you know where to pay to produce a specific sound. Something people don’t often take into consideration when learning to play is that you’ll have to stretch your hand to reach certain frets.

Since a guitar is larger than a ukulele, it’s slightly more challenging to learn in this aspect. With a thinner neck, you have thinner frets. With narrower frets, you shouldn’t have to stretch your hand nearly as much or with as much strain when learning to play the guitar.

If you have smaller hands, the ukulele is definitely easier for you to learn for this reason alone.

It Has a Smaller Tone Range

When playing the ukulele, you have a much smaller tone range than with a guitar. While this may not sound appealing, both instruments can produce beautiful sounds, but you can do less with a ukulele.

Learning to play a string instrument like the guitar or ukulele and maneuvering your hand and wrist to form chords can feel weird initially. You may even notice that your wrist is getting sore while practicing.

Since ukuleles are smaller than guitars, they reduce the amount of tension you’ll feel on your wrist. Less tension means you can practice for longer, making learning easier since you won’t feel like you need to take as many breaks.

The Chords Are Simpler

You’ve probably heard the saying about putting three chords together, and you’ve got a song. That’s very true for both ukulele and guitar. While both instruments allow you to play chords, learning to play chords on a ukulele is much easier.

Since traditional ukuleles only have four strings compared to six, their chords are easier to learn and practice. You’ll only need to press a couple of strings down at a time with a ukulele while on guitar. You may be pressing several or even playing bar chords.

Many musicians on guitar dread barre chords because they’re not the easiest to play, especially for someone with smaller hands.

Even with practice, stretching your finger across an entire fret can feel unnatural and be challenging. Since the neck is smaller, barre chords are much easier to play on a ukulele.

Ukuleles Tend to Be More Affordable than Guitars

The fact that they’re much more financially accessible makes them easier to learn than the guitar.

If you can’t get your hands on an instrument, you can’t learn how to actually play it. You can find a decent ukulele for around $100, while a good guitar will cost at least double that price.

Their affordability makes them great for beginners who aren’t ready to spend an arm and a leg on a new instrument. Whether it’s because you’re not sure if you’re regularly pursuing learning how to play or just prefer a more affordable option, Ukuleles are

When you watch someone play the guitar or ukulele, you probably notice how comfortable they look holding their instrument. That takes practice too! Ukuleles are much smaller than traditional guitars, making them easier for beginners to hold onto while playing.

The fact that they’re easier to hold onto means that you can continue to play for more extended periods without the instrument slipping or you getting uncomfortable. Guitars tend to be bulky and can be awkward to get used to holding.

A ukulele is small and easier to hold onto while you’re strumming away. The more comfortable you are when you’re holding your instrument, the longer you’ll be able to practice without stopping or needing a short break to adjust it.

Is Ukulele Easier than Guitar for Beginners? Final Thoughts

While what you think is easier to learn may be different than your friend, more often than not, people say learning to play the ukulele is much easier than a guitar.

The fact that there are fewer strings to play, the strings are softer on your fingertips, and its affordability makes it the perfect string instrument for a beginner musician.