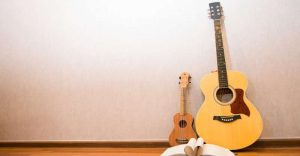 Is a ukulele a guitar? No, although they’re similar instruments and share their status as part of the broader lute family. Here is the difference between ukulele and guitar instruments, as well as what characteristics they share as lutes.

What Is a Lute?

A lute is any instrument you play by plucking the strings, with both a neck and a deep, rounded back around a hollow cavity. Lutes typically have an opening into the cavity, but that’s not required. Frets, the metal bars on the neck, are likewise optional on lutes.

Lutes include instruments of many sizes and styles, from large options like the theorbo to the small ukulele. Many lute styles are also available in different sizes, adding more control over the final sound.

All lutes, including ukuleles and guitars, share a similar basic construction.

The soundboard is a thin, flat plate of wood in a teardrop shape that sits just below the strings. The soundboard has either one or three holes that go under the strings, allowing the sound waves from plucking the strings to exit the interior better.

All changes to a soundboard affect its final sound, including straining the wood or applying a smoother cover to it.

Pickguards are optional components that go around the hole in the soundboard. These are usually extremely thin and exist solely to protect the soundboard from a player’s pick.

The bridge is a raised section on the bottom part of a soundboard with a series of connections to attach the strings. Moving the strings alone produces almost no volume, so lutes need a bridge to transmit the vibrations through the soundboard. Most bridges are made of wood, though you may also see metal, plastic, or even bone bridges on some lutes.

Some guitars have solid backs instead of open bodies. These guitars are closer to electric guitars than acoustic ones, often relying on electronic pickups to amplify their sounds.

The neck is a long extension out from the back of a lute, made to hold the strings and tuning pegs. Lutes usually mount the neck so it’s even with the soundboard after adding the fingerboard, whereas most other modern stringed instruments have the neck a little below the soundboard instead.

The fingerboard is a section on top of a lute’s neck that holds the frets. Fingerboards have a significant impact on comfort and playstyle, so choosing a good one is important when you’re buying any lute.

Fingerboards are traditionally made from different wood than the neck, often a darker color for contrast. Wood is easily the most common choice, but some people use synthetic materials like richlite instead.

Frets are raised sections on the fingerboard that a musician can press down on to change the length, and therefore the sound, of a string. Frets are traditionally gut or metal, and they tend to wear down over time. Although not mandatory for lutes, many musicians prefer them because they make it easier to get the right note in a particular song.

Most guitars have 19-24 frets, with 22 being among the most popular choices.

Strings are a vital component of all lutes. Differences in length, thickness, and material all have an impact on their final sound. Many modern strings on instruments are tin-plated steel, but you may also see bronze strings (actually brass, as they’re made of copper and zinc), phosphor bronze (copper, tin, and phosphorus), aluminum, or nickel.

Lutes originally used animal intestines for strings, often sourced from cows. Nylon synthetics are a more popular alternative these days, as they sound nearly identical to “gut” strings but are both cheaper and more durable.

Ok, so let’s move on to the guitar vs ukulele debate.

What Is a Guitar?

An acoustic guitar is a fretted lute, typically with a flat body instead of the rounder back you see on many other instruments in its family. Guitars also tend to have incurved sides, making them look vaguely similar to the number 8. The top part of the soundboard can be symmetrical, but guitar makers can cut part of it away to make the instrument easier to hold and play.

Guitars usually have six strings. That’s not a firm requirement, though. One relatively common alternative is having a 12-string guitar, with strings tuned in pairs to create slightly more complex sounds. There’s also the rare harp guitar, which has six additional strings that can be played separately, although these are arguably stepping too far away from being lutes.

There are many sizes for guitars, and each size has a variation of up to several inches. While no existing system adequately covers every option, most people use a four-size scale to determine guitar sizes: 1/4, 1/2, 3/4, and 4/4/.

1/4 guitars are the smallest option available. These are the guitars most similar to ukuleles and appropriate for children up to 5 years old or anyone who wants the smallest and lightest instruments.

Most 1/4 guitars aren’t particularly popular. They tend to sound duller and flatter than full-size versions, so most people consider them to be practice instruments more than anything else.

1/2 guitars are a little larger than 1/4 guitars, usually settling around 33 or 34 inches total. Like their smaller cousins, these guitars tend to sound a bit dull compared to the larger sizes. Guitars in this range work well for children who are roughly between five and seven years old, while adults typically avoid this size because it’s neither small nor capable of producing great sounds.

3/4 guitars are only slightly smaller than full-size options, hovering around 36 inches long. These are most suitable for children between seven and ten years old or adults who are a little shorter than average.

A noticeable change here is that guitars tend to start sounding much better than 1/4 and 1/2 models, although still not quite as good as a full-size option.

4/4 guitars, also known as full-size guitars, are easily the most popular option. These are usually between 38 and 41 inches long total, with larger and sturdier bodies capable of producing better sounds. Most people start using full-size guitars as soon as they’re big enough to play them properly.

Naturally, this is the most common guitar you’ll find on the market. If it’s not listed otherwise, there’s a good chance any guitar you see for sale is a 4/4.

Electric guitars are the outlier in this discussion. Superficially, they look similar to an acoustic guitar thanks to their long necks, flat tops, and a similar number of strings. They also play quite similarly, such that somebody used to one type can pick up the other and play quite closely to their regular level of skill.

However, despite the similarities in design and playstyle, electric guitars are not lutes and don’t serve as a good point of comparison.

All of this showcases how people often define instruments more by how they look and play, and less by their actual designs.

What Is a Ukulele?

From what we’ve seen above, is a ukulele a guitar? Clearly not. A ukulele is a small lute, based on a Portuguese design and eventually popularized in Hawaii. Like guitars, ukuleles come in four common sizes. However, unlike guitars, all of these sizes have good sound quality and people often choose them based on the sound they want.

Ukuleles also have just four strings (most of the time), compared to the six on guitars, and 12-15 frets instead of the 19+ on guitars. The difference in the size, number of strings, and number of notes you can play mean that ukuleles are fundamentally different instruments than guitars, despite their visual similarities.

Less obviously, ukuleles often have narrower tops, near the neck, than guitars do. This isn’t apparent unless you look closely and measure them, but the different shape has an impact on their final sound.

Soprano ukuleles are the smallest design, and what most people probably think of when imagining this instrument. It features a short note scale and tight fret spacing, with a bright and soft tone. Some manufacturers make soprano ukuleles with a longer neck, which can be good for anyone who has difficulty with the traditional spacing.

Tenors are about two inches longer than concert ukuleles, and start to resemble a 1/2 size guitar. Their necks are also a little wider, with more bass sounds and a deeper, fuller tone. Tenors are also louder than concerts, making them more popular for playing in front of larger crowds.

Tenors are when ukuleles start becoming practical for fingerpicking. Before this size, it’s often better to use an appropriate pick.

Baritone ukuleles are the largest option widely available these days. They’re about three inches longer than the tenor, with an even wider neck and the deepest sounds. Its size and sound make it easier to confuse with a 3/4 or even 4/4 acoustic guitar, but having four strings instead of six makes it easy to figure out which instrument you’re holding.

Guitar Vs Ukulele, What Is The Difference? Final Thoughts

So, is a ukulele a guitar? As you learned above, they’re not the same.

What is the difference between a ukulele and a guitar? Ukuleles and guitars have similar appearances, but since a ukulele can’t play the same types of songs as a guitar, we can’t call them the same instrument. However, ukuleles remain popular because they’re affordable, easy to learn, and fun for both newcomers and expert musicians to play.