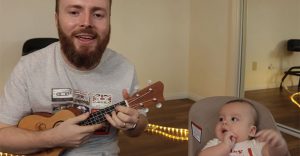 It doesn’t matter whether you’re a kindergarten teacher, owner of a daycare service, a musician entertaining young children, or parents with a newborn. Nursery rhymes are a staple for youngsters, and they are even valuable building blocks in a child’s development, teaching them the fundamentals of the language, and musical concepts like melody and rhythm.

In this guide, we’ll look at some of the top ukulele nursery rhymes. These adorable little numbers usually only feature three to four chords and are easy to play!

This popular English lullaby borrows from a 19th-century poem penned by Jane Taylor. Her poem was called “The Star.” The melody takes after the French melody “Ah! vous dirai-je, maman” (as do some other nursery rhymes).

As such, the song has been arranged in many ways through the centuries. Isn’t it wonderful that it has survived through the ages?

It’s a great little tune that reminds us just how beautiful and expansive the night sky can be, and to look up more often.

As with most nursery rhymes, “Three Blind Mice” is a simple song with just 12 bars. What might be somewhat unique is its time signature (6/8 time), but even that isn’t so unusual.

Also, there are many variations on “Three Blind Mice,” something many nursery rhymes have in common as well.

“Three Blind Mice” serves as a great introduction to music.

“Mary Had A Little Lamb”

Chords in this song: A, E

“Mary Had A Little Lamb” originated in the 19th-century. It was published by Marsh, Capen & Lyon, and it has been speculated that it was based on a real-life incident. A woman named Mary Tyler even claimed she was the “Mary” described in the poem (there isn’t enough evidence to support this claim).

Its first recording was in 1877 by Thomas Edison, who had just invented his phonograph(!). That’s quite noteworthy.

But most of us will remember it as that cute little song about Mary and her pet lamb.

The first printed version of “Baa, Baa, Black Sheep” harkens all the way back to 1744. Reportedly, the words to the song have not changed a great deal in that time.

As with “Three Blind Mice,” the song features just 12 bars of music. And, as with “Twinkle, Twinkle, Little Star,” it follows the melody of “Ah! vous dirai-je, maman.”

Although many have speculated on the origins and meaning of the nursery rhyme, there isn’t enough evidence to support most theories. And, to be fair, sometimes we just read too far into these kinds of things.

“Old MacDonald Had A Farm”

Also known simply as “Old MacDonald,” “Old MacDonald Had A Farm” is a nursery rhyme about a farmer and his animals. The song was written in 1706 (or possibly earlier) and was also published the same year.

It’s likely that English writer Thomas D’Urfey wrote it for an opera.

This is a fun song, as you can keep adding animals (and animal noises) to each repeat.

“Row, Row, Row Your Boat” is so simplistic that it can basically be played with two chords, and it only has four bars of music. The song was originally published in 1852.

The song is often sung as a round with up to four voice parts (or harmonies). After all, that’s more fun than just singing it straight through. It’s just better in a group!

“The Wheels On The Bus”

Chords in this song: C, G

This traditional number was written by Verna Hills. It was published in 1939 and is a popular children’s song in English-speaking countries.

With a repetitive rhythm, it’s a very easy song for people of all ages to pick up. Besides, it only has five bars.

For some reason, I can’t help but think of “Weird Al” Yankovic’s parody of “Another One Bites The Dust,” “Another One Rides The Bus” when thinking of this song (neither of which are child-appropriate, just in case).

“Head, Shoulders, Knees And Toes” is still a recent development compared to many other nursery rhymes in this guide. This one was first documented in 1961 and it is either sung to the tune of “There Is a Tavern in the Town,” or “London Bridge Is Falling Down” (personally, I think I’ve only heart it sung to the latter).

It is quite common for children to dance along to this song as it’s being sung, touching their heads, shoulders, knees, and toes in sequence. It’s all about those actions!

“Itsy Bitsy Spider” also goes by the name “Incy Wincy Spider” in Australia. The song describes the adventures of a spider going up and down a “watersprout.” There are a couple of thoughts on what “watersprout” refers to. It could be a gutter system, the sprout of a teapot, open-air reservoir, or something else, who knows?

Sounds to me like whoever wrote it might have had too much time on their hands and was watching a spider as they were moving about.

“Humpty Dumpty” is one of the most well-known nursery rhymes in English speaking countries. The rhymes have their origins in 18th-century England. As for the tune, it came from James William Elliot’s National Nursery Rhymes and Nursery Songs in 1870. Many of the song’s details, however, remain a bit of a mystery.

Some say the song is a riddle. Some say Humpty Dumpty was King Richard III of England, whose armies were defeated. There are many other theories, and they’re all quite interesting. It’s worth researching yourself if it interests you.

“Hey Diddle Diddle” is known by many other names, including “The Cat and the Fiddle.” Its melody was written by James William Elliot in the National Nursery Rhymes and Nursery Songs of 1870.

Some say the rhyme may have originated in the 16th-century, but others say it could be fully 1,000 years old.

Again, there are many theories as to what the song means.

“Star Light, Star Bright” apparently has its origins in the idea that your wishes are granted when you see a shooting or falling star.

It’s yet another song that reminds us of the beauty we are surrounded by in this world.

“Jack And Jill” is also known by the name “Jack and Gill.” It’s a traditional English nursery rhyme originally written in the 18th-century. In the 19th-century, new versions of the story were created.

“I’m A Little Teapot” was written by George Harold Sanders and Clarence Z. Kelley, who ran a dance school for children. The song was published in 1939, and at the time, it was called “inane” (suggesting that it was silly nonsense) in a Newsweek article.

The song evokes images of a whistling tea kettle, though the modern-day equivalent would be an electric kettle, which might heat up, but generally doesn’t whistle in the same way.

“The Muffin Man” is about a man who lived on Drury Lane in London. His profession likely revolved around making baked goods (like English muffins), but there are also theories that suggest he was poverty stricken. All this taken together seems to indicate that “The Muffin Man” may have been based on a real person. The lyrical content is relatively sparse, though.

Can I Learn The Melody To Nursery Rhymes On Ukulele Too?

Yes, you aren’t limited to strumming the chords or self-accompanying. You can also learn the melody to each song (also quite straightforward), and this is encouraged!

Learning the melody of songs, in general, tends to help you see songs from a few different angles, and can greatly enhance your ability to play riffs and licks too. If you’re a songwriter, then learning to play melodies can also help you with that process and give you needed inspiration.

Most songs are quite simple when broken down into their core elements, and that’s something you begin to understand more as you learn and analyze new songs.

We hope you had as much fun learning these nursery rhymes as we did putting together this list. These songs are all easy to play, and in most cases, only require three chords! Even if you’re just starting out on the uke, this is a great place to start. Get those basic chord shapes down and that will translate over into a lot of other areas of learning the uke, if you want to take it further.

Your children will thank you for learning these. Best of luck with those little ones.