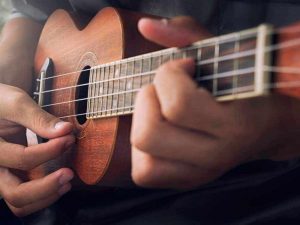 The ukulele is known for its ability to host different music styles, and jazz isn’t an exception. Since they originated nearly at the same time, many musicians succeeded in employing the ukulele to play the flashy style of jazz music.

You can play jazz on pretty much any ukulele type. However, the most used ones are banjoleles and archtop ukuleles because of their smooth and rich sounds.

Generally, whether you’re a ukulele player or not, you’ll find your hands itching to play jazz whenever you hear songs like “Over The Rainbow” by Israel Kamakawiwo’ ole, or any song by Lyle Ritz, who produced several albums playing jazz on the uke.

Nevertheless, playing jazz requires basic knowledge of some different chords and chord progressions. Over time, you will master the art of chord substitution to be able to jazz up some songs even if they’re not jazz in the first place.

Keep reading this article to find more about jazz chords and progressions and how to play them.

This a general idea on how jazz chords and progressions are made.

Jazz chords are simply the standard chords you’re familiar with, but with small changes. You can make a chord jazzier either by adding a new note to the chord or altering a note that was already there. There are four families of jazz chords:

7th chords are the most common jazz chords you’ll hear about. They’re created by the addition of an extra note, the seventh, to the regular major triads.

Let’s say we have the C-E-G chord, which is a major chord on the C scale. If we add the note, which is the interval of the seventh above the chord’s root, it’ll go C-E-G-B, which is a jazz chord.

Like the seventh chord, it’s created by the addition of an extra seventh note to the original triad. However, the original chord, in this case, is a minor one.

For example, the minor seventh chord on the C scale is C-Eb-G-Bb.

A sixth chord is a regular major chord with the 6th note above the root note added.

For example, the sixth chord on the C scale is C-E-G-A, where A is the added 6th note.

A ninth chord is actually a seventh chord with the ninth note added.

For example, in the key of major C, the seventh chord is C-E-G-B. By the addition of the 9th note, we will have the C-E-G-B-D chord.

Chord progressions are sets of musical chords from one scale that are put together. Basically, they are written in the form of roman numerals to tell you in which order you should play the chords.

Now, you can change any standard progression to fit the jazzy style by a simple substitution.

The basic rules are:

With that said, let’s take a look at two of the most common jazz chord progressions and how they can be played:

Assuming that we’re playing in the key of C, we should play the 1st, 6th, 2nd, and 5th chords in the same key. Therefore, the chords will be C major, A minor, D minor, and G major.

However, to make them sound more sparkly and jumpy, we’re going to keep the C chord as it is and alter the other three. Hence, the new chords will be C major, A seventh, D seventh, and G seventh.

Let’s see how each chord is played:

Now that you’ve learned how to play the chords in this progression let’s take a look at the rhythm.

To play this progression with a jumpy rhythm, you should play it this way:

Among the most common progressions in jazz music is the ii-V-I progression. It’s played in the key of A major, so normally, the chords will be B minor, E major and A major.

Nonetheless, we’ll change the chords to be B minor 7th, E dominant 7th, and A major 7th because, as we said before, the use of a seventh chord instead of a triad gives the progression a more jazzy tune.

Moreover, it’s possible to play the E13 chord instead of the E7 since they are both dominant chords. However, the E13 chord has more notes, which will add a more vibrant sound to the progression.

Now, let’s see how each chord is played:

As for the rhythm, the ii-V-I chord progression is best played with a swing time strumming technique. This means you should play the “down, down, up” rhythm while giving the down strums more time compared to the upstrokes.

Perhaps jazz isn’t the easiest style to play on the ukulele, but it’s worth the effort. Even if you’re not keen on learning all the theories of substitution, you can play many jazz songs with the two progressions mentioned above.

However, if you want to find out more about jazz chord progressions and substitution, you can check some instructive ukulele books like “The Ukulele Chord Handbook” by Randy McGarvey or “Jazzing Up The Ukulele” by Fred Sokolow.