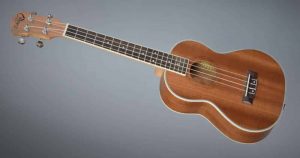 The world of ukuleles is quite a large one, which may leave you feeling lost and confused among the numerous choices. There are many types and brands to take your pick from. While having multiple options can be great, it can also make it somewhat tough to make up your mind. Lohanu Ukulele is one of the industry’s companies that have gained wide recognition among different countries around the world. It’s a Canadian company that goes all-out to produce ukuleles of the highest quality worldwide.

Here, we’ve brought you a comprehensive review where you can gain a profound insight into the Lohanu Ukulele’s top three models: the LU-T (tenor), LU-C (concert), and the LU-S (soprano).

Hopefully, our extensive synopsis can help you decide whether Lohanu Ukulele has the best ukuleles out there waiting for your purchase.

Lohanu has been one of the best-selling brands with top-rated ukuleles on Amazon across all models. Surprisingly, the brand is actually worth the hype, mainly due to offering a middle ground between quality and price.

Lohanu ukuleles are mainly ideal for beginners but could also serve as convenient backups for professionals or those searching for ukuleles that could easily be carried around.

Generally, Lohanu has standardized the features of its ukuleles across all models, so while this review is based on the LU-T, the features apply to the LU-C and LU-S as well.

● Doesn’t need to be tuned often

● Not suitable for stage performance

Before we delve into our exclusive review of Lohanu ukuleles, we must introduce you to the three main types of ukuleles: tenor, concert, and soprano.

The differences between all three of them lie in their sizes as well as sound properties. As a general rule, the bigger the size of an instrument, the deeper the sound and tone it delivers.

Their sizes go from the smallest to the largest accordingly: soprano, concert, and tenor. Tenor ukuleles are the most highly demanded, due to having the deepest tones among the three types.

In this review, we will give you a comprehensive overview of each model and how they differ from one another. That way, you can easily decide whether the Lohanu brand works for you and which type of ukulele is the most convenient for your needs.

Lohanu ukuleles have a neat finish to their construction, which delivers a high sense of detail-orientation by the company.

The outer appearance of the ukuleles conveys a much higher value considering their actual price, mainly due to their light satin finish. They are made of laminate wood, which makes them robust against humidity and temperature changes.

Furthermore, the top, back, and neck of the ukuleles have decorative white plastic strips running along their edges, that exceedingly add to the prestigious look.

This is in addition to the laser-engraved headstock logo on each of the Lohanu ukuleles.

Furthermore, the ukuleles have a rosewood fretboard, which suppresses any attempts of overtone.

Regarding the nut and saddles, they are made out of TUSQ, a sturdy solid material, which allows the strings vibration to transfer to the body of the ukuleles and thus deliver much superior tones. This is a distinguishing factor from the rest of the budget ukuleles that generally use low-quality plastic for the nut and saddles.

Last but not least, the strap buttons are already pre-installed when you receive your ukulele. While most players tend to neglect using the straps, it’s always handy to have them already there if you ever need them.

It’s not very common to come across ukuleles that are of lightweight, which is another factor that makes Lohanu ukuleles stand out!

The ukuleles are significantly light, weighing around 1.2 pounds, with light bodies that equip them to become the ideal travel buddies.

Even if you don’t carry them around when traveling, they are also ideal for those who play for prolonged periods, since you barely feel them on your hands and shoulders. That’s how easy they are to carry!

The lightweight of the Lohanu ukuleles and their tight, neat constructions, lead them to deliver a warm, sweet sound.

As you would expect, the tones are not the richest nor the most resonant due to the bodies themselves being composed of laminate wood, not solid wood or koa.

Overall, the tones they deliver are very suitable, considering that they are beginner ukuleles and that they don’t produce any buzzing sounds even when struck hard.

The LU-T probably has the most bass and volume, due to its larger size, while the LU-C and LU-S would be expected to have lower tonal qualities, which is ideal for players seeking delicate tones.

Many people mistakenly believe that it is hard to find a ukulele with excellent playability at a lower price point. However, Lohanu managed to prove this point wrong.

Right out of the box, Lohanu ukuleles are set to go! String heights are set at middle-ground heights, so you could easily play the ukuleles right away without having to bear with any fret buzz.

The frets themselves are even, and you won’t struggle to move up or down the necks.

LU-S, in particular, is reviewed commonly on its excellent playability, despite being the smallest in size among the three types of ukuleles. Thanks to its delicate finish, your fingers are given room to move up and down the fretboard easily.

Being 3-inches longer than the soprano, however, the LU-C has a fretboard of wider spaces. Not only does it give players the extra smoothness while playing, but it also makes it easier for players with larger hand or finger sizes.

Nothing competes with the LU-T, though, due to being of bigger size than its counterparts. LU-T is considered the most comfortable of all of them.

Lohanu has proven time and time again that it has superior customer service and that the entire company is fully dedicated to customer satisfaction.

Even in the case that any of their ukuleles get shipped with defects or any flaws, they immediately handle the issue and own up to their shortcomings.

Not just that, all the ukuleles further have a lifetime warranty against issues relating to craftsmanship and materials!

What’s Included in the Box?

What is even more impressive than getting your all-new Lohanu Ukulele, is the handful of accessories that come along.

All Lohanu ukuleles come with a gig bag that is padded and has a pocket. Despite its necessity, people have complained about its low quality. Even though it’s padded, the padding is too minimal to give the ukuleles the needed protection.

Alongside your lovely instrument, you will find a simple strap that can be helpful if you’re a beginner.

You can also find a battery included along with a digital clip-on tuner. It works fine, and you can use it with great ease.

There is also a plastic pick that nobody ever uses, yet it is nice to be given the option. Again, it doesn’t have a negative impact as most players prefer using their own fingers to strum.

The most interesting part of this package is the extra set of Aquila Nylgut strings. Not only are they helpful for when you need to change the strings, but they’re also among the finest. These strings are known to provide a pleasing cadence for you to enjoy your melody creation process.

Lohanu ukuleles tend to have the most positive reviews, to the extent that they are now best-sellers.

The largest crowd is fond of the instrument’s impeccable sound, given its affordability compared to other ukuleles of the same budget. Several users have mentioned buying more than just a single Lohanu ukulele after their great experience with the instrument.

Many have recommended the brand to newbies and those who want to embark on their first ukulele journey without having to exceed their budget.

However, numerous complaints were directed at an issue with the finishing. Despite being reasonably sturdy, many users have faced structural issues after several usages. Many purchasers are requesting a more robust physical structure.

When it really comes down to it, while Lohanu Ukuleles may not be the best brand out there, it provides a fair quality and exceptional service considering its attractively priced ukuleles. It banished the struggle of finding a good ukulele without harming your bank account.

The upsides of the Lohanu ukuleles far exceed their downsides, which allow the brand to pave its way to the top of the ukuleles list. Ideally, the Lohanu ukuleles should be a top choice for novices and for those who want to practice without having to invest substantially.

The Lohanu Ukulele brand is definitely a significant value for the price, and has earned the place where it stands today!