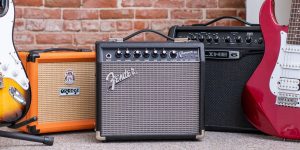 Ukulele amplifiers can make your instrument sound much louder and a lot better to your audience. Some ukuleles are played acoustically and don’t require any amplifiers. However, if you will perform for an audience, you will need an amplifier whether you are playing an acoustic ukulele or otherwise.

Also, with the increasing popularity of electric ukuleles, amplifiers became a must for the instrument to be heard. Some amplifiers are too small and can fit in your backpack. Others are a bit larger and harder to carry around.

In this buying guide, we will talk to you about the best ukulele amps and their best features.

So, without any further ado, let’s jump right into it.

At a glace, here’s our list of best ukulele amps:

Fishman Loudbox is the perfect ukulele amplifier for most musicians. For starters, it is the most powerful amplifier on our list. It has two input channels, which allows anyone to sing along while playing their uke.

One thing that makes it unique is that it can make you sound louder without changing your voice; also, you can use some sound effects or EQ.

When it comes to the specs, the Fishman Loudbox two input channels mentioned above are ¼’ jack and XLR. One jack can be used for plugging the instrument while the other is used for microphones.

There is a master volume control and 3 EQ knobs for low, mid, and high reverb, chorus, and gain in addition to 2 EQ controls low and high for reverb and gain.

Furthermore, you can get this amp with an internal rechargeable battery, which will cost you a little more but, you will get 4 hours of playing at full volume in return and 18 hours at low volumes.

This is great for performing a couple of songs in places where it is hard to find an outlet or in case of short extension cords.

Fishman Loudbox is directed for those who want to get a natural tune without any distortions.

Fishman Loudbox Mini is a great amplifier for musicians who need to be louder for gigs or busking. You might need pedals if you use many effects, but for those who use a bit of reverb and maybe tweak the EQ a little, this amp is more than enough.

This amplifier is one of the Kala Tweed amplifiers series, which is specifically designed for ukuleles. The best thing about the amplifier is that it is small enough for you to carry it around to different places. Meanwhile, it still puts out a great sound. It is light and affordable.

The amplifier comes with two 9 volt batteries and has a power of 5 watts. This makes it more of a practice amp rather than being an amplifier to use at concerts or large gigs.

Kala Tweed amps are known for the nice quiet tone that doesn’t change the sound of the ukulele. The gain control can lend some nice crunch, but you will end up with a clean sound.

One thing that you might notice is that there could be a bit of distortion when the gain is down, and you crank up the volume. However, it is not enough to cause an issue even at the highest volumes.

There is a single tone control that is labeled “treble” beside the gain and volume, but unfortunately, it is not as precise as bass amps with mid controls.

Kala amplifiers are great ukulele amps for players that want to get a clean sound, and at the same time, they don’t need a loud amplifier.

Danelectro Honeytone has a single 9-volt battery that is easy to replace and will last for several hours. Unfortunately, it is the least powerful on our list, but people still buy it to get a bluesy crunch to their instrument.

As mentioned above, the amplifier is pretty basic and comes with one knob for each of the volume, gain, and tone. It is not the best option if you are looking for a loud, clean sound.

When you turn the gain down and the volume up to its maximum, the sound produced is barely louder than a standard ukulele, and sadly, while turning the gain up helps the volume, it adds distortion to the mix.

On the bright side, the distortion added is a great crunch for anyone who is into blues or rock music. Actually, turning both the gain and the volume up produces a distorted yet very loud sound that any rock musician will want and makes this amp one of the most popular amps with harmonica players.

Danelectro Honeytone is a great electric ukulele amp for any musician who is into rock music. It is light and small, which makes it portable, and it will add a crunchy sound to your music.

Fender Passport Mini is an excellent ukulele amp for players who want to get a portable amplifier that they can use to customize their sound with a wide range of effects.

It is powered by 6 C batteries, but it also has the option to be plugged into the wall. There are two channels so players can use it to sing while playing their instruments.

One thing that makes this amplifier stand out between the other amps on the list is that it offers you a huge range of sound effects including Reverb, Delay, Vibratone, Echo, Flange, Tremolo, Phase, and chorus.

Not only do you get this wide range of sound effects, but also, most of these effects can be further customizable. Surprisingly, it doesn’t stop here. You can use a Fender FUSE to plug the amplifier into the computer using a USB port, which will give you the chance to create your own effects and get creative with it.

The power of this amplifier is 7 watts, which makes it one of the most powerful small amplifiers for busking and small gigs. However, it is not loud enough for large or loud venues.

Fender Passport Mini is a unique ukulele amplifier that will give you the advantages of any small amplifiers but with a stronger battery and a louder voice. Also, you will have the option to customize and create the sound effects you like.

Roland Mobile AC is an impressive amplifier that has an amazing battery life that will last you for 15 hours before you need to recharge it. Again, it is a small portable amplifier with stereo speakers that are loud enough for busking and small gigs. Also, it can accurately reproduce a natural acoustic tone.

It has two input jacks, one for the microphone and another for the instrument. Each input has dedicated volume control in addition to some buttons that will help you add a chorus effect. Unfortunately, there is no independent EQ for each channel. However, there is one knob for tone control, which affects the sound of both channels.

How to Pick a Ukulele Amplifier

You can find two types of amplifiers, one called a combo amplifier, and the other is called a head/cabinet amplifier.

The combo amplifier is the more common one, and in simple words, it contains everything you need in just one box.

The head/cabinet amplifier has two parts. As the name suggests, one part (which is the smaller part) is connected to the head, and the other bigger part is the speaker cabinet. The part connected to the head doesn’t contain any speakers and only contains the controls and amp circuit.

The two parts of the amp are connected to the power through a speaker cable. This is why this type of amplifier usually has more power than the combo ones.

There are two types of amplification states, namely solid and tube state amplifiers.

The solid-state amps are more common and use a transistor that boosts the signal. They offer a clean sound, and most of them are used for acoustic instruments.

On the other hand, tube state amplifiers are kind of out-of-date- and a lot they use vacuum tubes to boost the signal.

Tube amps are too expensive and rarely used for ukuleles.

The gain of the ukulele is controlled by a knob that is labeled gain or trim. One thing that you should know is that if you crank up the gain too much, the sound of the instrument becomes distorted. However, the gain will help you optimize the input signal.

The EQ allows you to have control over certain frequencies as in bass, middle, and treble.

The bass controls the lower frequencies, which gives you a softer sound with more feel.

On the other hand, the middle has control over a larger span of frequencies, which is why it is also called a Parametric EQ.

Can You Use a Guitar Amp for a Ukulele?

Fortunately, the sounds and the tonal range of the ukulele are within the ranges that a guitar amp can handle. This means that using a guitar amplifier will work absolutely fine with your ukulele.

Can You Play an Electric Ukulele Without an Amplifier?

Pure electric ukuleles need amplifiers to be heard well. On the other hand, an acoustic-electric ukulele can be played without an external amplifier, and it will still produce a loud sound.

What Is a Preamp?

A lot of people don’t know what a preamp is and how it is different from an amplifier.

A preamp is what you use to boost a weak signal before the gain stage. This makes the sound strong enough for other equipment to work with. On the other hand, an amplifier boosts a baseline signal to be sent to a speaker so that it sounds louder.

There is no ultimate best ukulele amplifier. Every musician looks for something different than the other depending on the type of music they play, the sound of their instrument, and where they practice or perform.

Most musicians will be satisfied by Fishman Loudbox Mini; however, those who like to have a lot of sound effects will prefer Fender Passport Mini. Danelectro Honeytone is an excellent option for those who want an ultimate portable amplifier. We hope you find this list helpful, keep rocking!