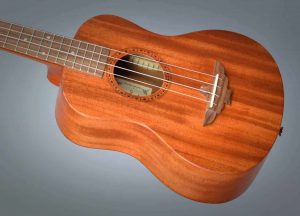 Buying a new ukulele is a never-ending dilemma for those who are eager to play the instrument. With the diversity of brands and the number of options and models that the world of ukuleles offers, it is easy to lose track of what’s good and what’s not.

Thankfully, there are many companies in the ukulele production industry that are now taking the lead and distinguishing themselves very visibly. Aklot is one of them, having succeeded in gaining its spot among the crowd by producing high-quality instruments at affordable prices.

Aklot has built its reputation on being one of the best-selling brands for budget ukuleles. That reputation didn’t stem out of nothing; its ukuleles are certainly crafted attractively, and they deliver excellent sound, almost comparable to those of high-end brands.

● Not the best set of accessories

Aklot offers the main three types of ukuleles: the soprano, concert, and tenor. While this review is based solely on the tenor-sized Aklot AKT26, the majority of the features apply to the soprano and concert ukuleles as well, since the brand applies the same business model to all three.

Whether you opt for the tenor, concert, or soprano, you will get a finely constructed piece of art. Once you place your hands on one of the Aklot ukuleles, you’ll realize their sturdiness.

The ukuleles are built with solid mahogany tops, backs, and sides, with obviously clean and detail-oriented craftsmanship. As for the necks, they are made of Okoume wood, which delivers a sort of contour to the overall look of the ukuleles.

Such a structure is significantly valuable, given its budget-friendly price, for it is not always easy to find a ukulele at an affordable price that is still crafted firmly.

One distinct aspect of the tenor ukulele, in particular, is the bird-shaped bridge, which depends on your design taste. This design does influence the restringing process, however, since the strings pass through holes in the bridge that are secured by knots inside. This can be easily managed through making a change of strings, though.

Lastly, the tuners are accurate and smooth and do not require much tuning when you first start using them. Aklot did not make cheap decisions here, which makes the entire experience with the ukuleles much better. They are also designed in a simple classic design, conveying an overall elegant appearance.

The choice of the wood and the structure play a vital role in the sound produced by the Aklot ukuleles. Since Aklot ukuleles have proven to be of firm structure, they guarantee a distinct tonality, delivering rich and complex tones with vivid volume and projection.

It’s worth mentioning that most budget ukuleles similar to the Aklot ones are generally made out of laminated wood, which is cheaper. This comes at the expense of the tone since laminated wood cannot possibly produce the same sound as solid wood.

Accordingly, the Aklot ukuleles are guaranteed to deliver some of the most high-quality tones possible by budget ukuleles!

Most importantly, Aklot ukuleles don’t have any tuning issues. Consequently, they stand tall among their competitors, despite not being the best ones out there.

Aklot tenors deliver the most lucid and deepest sounds of them all. However, sopranos and concerts still produce tones void of unneeded buzzing noises.

There is a common misconception floating around that budget-friendly ukuleles deliver poor playability. Gladly, this is not the case with Aklot ukuleles. Regardless of what type you choose, all three types provide almost the same playability comfort.

One of the best things that Aklot ukuleles deliver is the smoothness you get while playing. They are positively reviewed frequently about comfort in terms of navigating up and down the fretboard.

The height of the strings, commonly known as the action, is also agreed upon since it makes the jamming process go even and with a great flow. The bigger the ukulele, the better playability you’ll get. However, some perceive the string height to be slightly higher than usual.

As for the fretwork, Aklot ukuleles have even fretboards, with wide spaces and no sharp fret ends standing out unevenly. However, for those with bigger hands, the tenor would be ideal given its bigger size and accordingly wider spaced fretboard.

What’s Included in The Box?

Just like most of the ukulele brands, Aklot provides a set of accessories with its instruments. However, they do not match the overall quality of the Aklot ukuleles, which make the accessories the only downside of Aklot ukuleles.

The ukuleles come with a gig bag, which is of good quality but somewhat thin. It comes with some cushy padding that provides good protection for the ukulele. It also has double zippers and a pocket. The bag only comes in black color with the brand name ‘Aklot’ written in white.

Another useful accessory that comes along is the clip-on tuner. People have reviewed it to be a good one that you can easily read. It also works very well.

While being unnecessary to most uke players, straps are always found in the kit, taking the form of a classical-guitar style one.

Picks are yet another tool that people barely use, but that comes with the package anyway. Aklot is still giving people the choice of whether to pick them up or not. They are usually made of plastic.

Most importantly, the box contains a getting started book, which is very convenient for beginners who tend to have many questions. It sets them on the right foot and gets them playing in a much shorter time!

The majority of users who have purchased one of the Aklot ukuleles are happy with what Aklot has to offer. Most people claim that Aklot delivers more than what you actually pay for. The build quality is great, and the sound is magnificent.

However, most users insist that despite the greatness of the ukuleles, they are the best choice for new beginners rather than experienced players.

All in all, Aklot ukuleles make the best choice for those who are eager to learn to play the instrument and don’t want to break the bank. Aklot provides a perfect balance between quality and price!

Aklot ukuleles guarantee to deliver a delightful musical experience through their beautiful crafts and incredible sounds. Therefore, they are the best investment for anyone who is looking to start delving into the world of ukuleles.