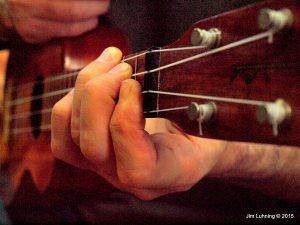 Here’s what happened: You started learning to play the ukulele, everything is going smoothly, and you’re having the time of your life. Lurking in the background is the B-flat chord. It is watching you intently waiting for you to get to it so it can ruin your ukulele streak. Not for much longer, B-flat.

In order to be able to master playing the B-flat chord, you must know what barre chords are. Barre chords will open up doors for you to play a variety of chords that you couldn’t play before.

What Are Barre Chords?

Simply, a barre chord is when you hold down two or more strings at a time using your index finger. The reason barre chords are considered ‘difficult’ is that the strings’ tension is not so easy to hold down on.

Barre chords can get complicated. So, in order to start playing barre chords easily, start with simple chords that don’t require awkward movements of your fingers.

Start by holding down different combinations of strings. It doesn’t have to sound good; you just want your fingers to get used to the tension of the chords. Also, if you feel like you can’t grip your ukulele enough or the strings apply too much tension, use your thumb on the back of the ukulele to add any support you’re missing. Keep trying until it feels most comfortable for you to play a barre chord.

Assuming that you are now familiar with holding down strings, here’s what you need to do to play the B-flat chord.

Start by placing your ring finger on the top string (the G string) on the third fret.

Those three steps are the B-flat chord simply explained. Start slowly, taking it gradually. When your ring finger is in the right position, and the note sounds good, only then you can move on to the next step.

Don’t try playing the chord all at once without making sure every finger is the right place. You cannot solve an issue without knowing where the problem lies.

What Those Notes Mean

The reason why you need that combination of notes exactly is that B-flat is a major chord. Major chords are played using 1,3, and 5 in the respective major scale. In the case of the B-flat chord, those notes are D, F, and B-flat.

Playing the B-flat chord is not hard. It just needs a little extra effort because it can be uncomfortable for your fingers.

Before getting into the B-flat chord, you should be familiar with barre chords. Simply, barre chords are when you hold down on multiple strings with your index finger. Practice easy barre chord, even if they sound bad. You just want your fingers to get used to how it feels to hold down.