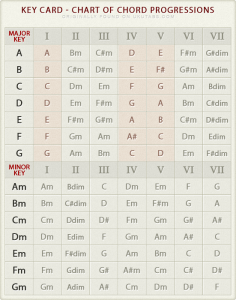 You shall keep in mind that there’s a large space for creativity. Trying out different chord progressions to figure out what sounds best to your ears is something that I suggest every musician should try at one point or another.

However, let me discuss with you the basics of writing a song and what a key card is so that it’s easier and quicker for you to write your first song.

And without further ado, let’s get into it

What is the key card?

This is basically a group of chords that are more often than not played together because they go in harmony, or in other words, they sound good together.

If you are a beginner and still not familiar with a lot of songs, you will be surprised by the number of songs you can play just by learning 3 or 4 chords that sound good together.

Even if you are just starting your music learning path, it won’t be long before you can tell that you are able to play this song just by seeing someone else playing it and in a while, you might be able to to do so just by listening to the song.

If you check out any key card, you will find that it is just a table containing different chords with a specific order.

These chords are arranged in a way so that each horizontal line contains a group of chords that are matching or are known to sound good when played together.

You can simply choose some of these chords and try to see how they sound then decide which chords you should use to write your new song.

Once you have picked your chords, it’s time to come up with a strumming pattern.

This is my favorite part because this is the part that makes all the difference and gives the song it’s special beat.

When you are done with the chords and their strumming pattern you become ready to add your lyrics and voila, you just successfully wrote your first song.

If you take a look at a key card, you will see it is divided into two parts:

At the very top, you will be able to see the scale degrees, these are seven degrees arranged in Roman numbers from I to IV (progression chords).

The major key is further divided into three groups

This combination of chords sounds good all together and is called “figured bass or thorough bass”.

On the left side, you can see the name of the key, and on the same horizontal line, you can find the scale

If you are playing the figured bass, it would be only the chords in the I-IV-V progression

So if we take the above-mentioned keys as an example, it would be:

With all that being said, you should now be able to understand the key card chord progression

However, don’t ever hesitate to try a different bunch of chords and see how they sound, at the end of the day, this is what makes one song sounds better than the other.

Hopefully, you can find the right combination of chords for your new song and you found this helpful. Happy strumming!